The Sacrament: A Novel 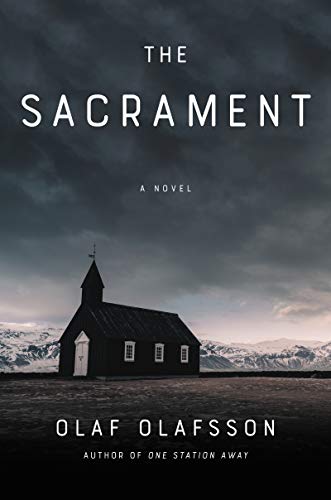 “beautifully crafted, unusually structured novel about the inescapability of memory, the tragic scars left by trauma and abuse, and the abuse of power.”

Olaf Olafsson opens his sixth novel, The Sacrament, with a powerful scene: cruel abuse by a nun directed at a young boy in her Icelandic classroom. She first mocks the boy for knitting poorly by pushing the point of his needle into the back of his hand while lecturing about how Christ’s hands were pierced, egging his classmates to laugh at him as she does. She then removes him from the classroom, shoves him into a broom closet, and locks the door. She also fails to let him out.

From the window of that closet, trapped and forgotten, he witnesses the fatal fall of the school’s headmaster priest from the top of the church bell tower. The boy thinks the apparently winged creature is his hero, Batman, flying out to save him. The figure inert on the ground is the death of both the priest and the boy’s hope.

The scene will turn out to be pivotal in this intellectually and emotionally challenging novel. The protagonist, Sister Johanna Marie, was visiting the school at the time, having been sent to investigate allegations of sexual misconduct on the part of that priest.

It is a journey rife with implication for her; she was selected for the mission through the intervention of another priest, Father Raffin, who had exercised considerable emotional power over her when she was simply Pauline, a student at the Sorbonne, who recognized that she was “different,” because she wasn’t attracted to boys and had decided to study theology to understand or confront the God who would have made her “evil,” as her priest back home had told her. In her second year at the Sorbonne. However, she falls in love with Halla, her Icelandic roommate who teaches her the Icelandic language and intimacy.

And she also learns—again—about evil. Father Raffin, having become aware of Pauline’s deep feelings for Halla, shames, pressures, and threatens her. Pauline hurts and confuses Halla by abruptly ending their relationship. She hides from Halla and herself by becoming a nun.

Years later, Raffin again manipulates Sister Johanna, still a young nun, by having her sent to Iceland, Halla’s home, to investigate the allegations of sexual molestation by the headmaster at a Catholic elementary school there. Will she try to see Halla? Or was she chosen for this task merely because she speaks Icelandic?

The nun muses, “I hadn’t spoken to him for years, but clearly he had stored my name somewhere in his brain. I suspect that deep down I had always feared the day would arrive when he would dredge it up again. More so during the first few years, of course, and yet somehow I never managed to feel at peace and was always half expecting the past to catch up with me—inevitably in association with Father Raffin.” As she travels through Paris on her way to conduct the investigation, she relives and recounts the story of her lost relationship with Halla.

She is not welcome at the school in Iceland, where she deals with the refusal of frightened parents and children to accuse a priest. And, especially, she must deal with the faulty memory—or refusal--of the boy she accidentally finds locked in the broom closet, who inadvertently witnessed the apparent suicide of the headmaster/priest, which takes place while Johanna is investigating him.

None of this emerges in sequence, but in a nonlinear narrative structure. We are brought to it slowly, much as memories, insights, and regrets arise in the alternate fog and sudden clarity of daily life. After the opening scene, Olafsson switches the time frame of the story to the present.

Father Raffin, now a cardinal, comes to the convent to which Johanna has retired, another 20 years after she wrote the report of her investigation, now with a letter from the grown-up broom closet boy, that says, “There’s something I didn’t tell you.” He wants to tell his story, the truth, but he will only speak to Sister Johanna Marie.

So the now-cardinal, who has wielded so much power in her life, sends Johanna back to Iceland. What does this former schoolboy know—or remember now—that he must tell Sister Johanna Marie? She believed the headmaster guilty but had been unable to prove anything. Is the Cardinal trying to shame her, to show her report was flawed? Or to exonerate the school? She is not sure what he wants. Perhaps he is testing her—and his power over her—yet again because of Halla. And what of Halla? Could the now elderly nun find her in Iceland if she decides she wants to?

Because of the narrative time shifts between the present, the nun’s second trip to Iceland, back to the 1960s, when Pauline and Halla were students at the Sorbonne, and to the 1980s when Sister Johanna made her first trip to investigate, a reader needs to pay attention to avoid confusing the two journeys, both of which are ordered by the Cardinal Raffin, who keeps exerting control in the nun’s life.

Also, the author has chosen not to use quotation marks in dialogue, making it sometimes difficult to discern interior monologue from spoken exchanges. But none of this is mentioned to discourage a prospective reader from picking up this beautifully crafted, unusually structured novel about the inescapability of memory, the tragic scars left by trauma and abuse, and the abuse of power.

Characters are distinct and vividly drawn as the novel examines the response of individuals and the Catholic church to moral and ethical dilemma. The prose is lyrical, and descriptions are brilliantly evocative of place and atmosphere. This is a novel to read closely, think about, and read again; it’s that good.