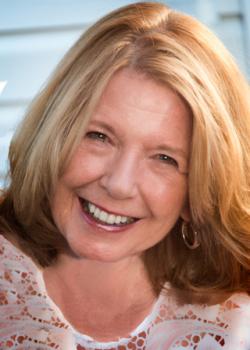 Lynne Hugo’s eighth novel is The Testament of Harold’s Wife from Kensington Books. She is a National Endowment for the Arts Fellowship recipient who has also received multiple grants from the Ohio Arts Council and the Kentucky Foundation for Women.

Where the Trail Grows Faint, about animal-assisted therapy in a nursing home with a sweet and crazy Lab, won the Riverteeth Literary Nonfiction Book Prize. Previous novels include A Matter of Mercy, which received the 2015 Independent Publishers Silver Medal for Best North-East Fiction, and Remember My Beauties. An earlier novel, Swimming Lessons, was produced by Hearst Entertainment as a Lifetime Movie.

Ms. Hugo’s first two books were poetry, and well-crafted, lyrical language remains an important element of her prose. She aims to write complex characters contending with contemporary dilemmas and searching for realistic hope. She is currently intrigued by the challenge of juxtaposing humor and heartbreak in her work, hoping to capture how the tears of each come from the same human place.

Born and educated in New England, she and her husband now live in Ohio with Scout, a yellow Lab feared by squirrels in three states.

The Testament of Harold's Wife

A Matter of Mercy

Where the Trail Grows Faint: A Year in the Life of a Therapy Dog Team (River Teeth Literary Nonfiction Prize)

A Frenzy of Sparks: A Novel

“The author’s portrayal of the adolescent girl is so graceful, so intelligently sensitive, the writing so lyrical and lovely . . .”

Perhaps any novel that takes place largely in the minds of octogenarians and an arguably distraught—possibly disturbed—single mother may seem to wander over wide psychic territory.

“The best readership for this novel may be those most fascinated by the real or imagined lives of artists, a journey that King has portrayed effectively and compassionately with well-crafte

The Sacrament: A Novel

“beautifully crafted, unusually structured novel about the inescapability of memory, the tragic scars left by trauma and abuse, and the abuse of power.”

Right after the Weather

“In this exquisitely written, psychologically sophisticated novel, rich in insight and sensitivity to human vulnerability, Anshaw suggests that shared tragedies do not nece

There are wonderful novels that transport a reader far from the world as it is.

Clover Blue, Eldonna Edward’s second novel, is set during the mid-seventies, in what Edwards names the Saffron Freedom Community, which she places in outside Santa Rosa, California.

The Behavior of Love: A Novel

“[W]hen love ends in frustrated, sad, even bitter disappointment, what does that really mean? Does it, in fact, end?

Lost and Wanted: A novel

Nell Freudenberger opens Lost and Wanted with wicked good literary instinct: “In the first few months after Charlie died, I began hearing from her much more frequently.