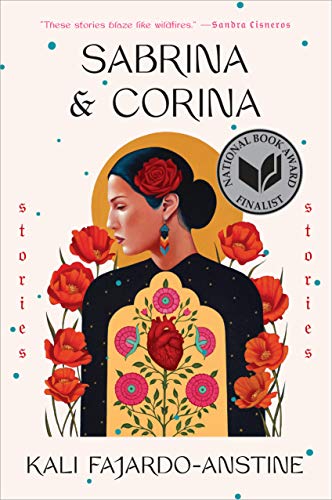 You will clutch your heart reading Kali Fajardo-Anstine’s short story collection Sabrina & Corina. Her stories are that heartbreaking, each one like a gift from a small child, offered with earnest, luminous eyes, innocence itself, impossible to reject.

There are 11 stories, slightly joined by their characters, most of them brown women: Native Americans, Latinas, or both, all so clearly drawn that they must surely be living physical lives as real people somewhere. They lend their pain to the narrative of the disenfranchised, to the nostalgic for some corner of the earth to claim them, and to the discarded that are at the heart of what obviously moved Fajardo-Anstine as she wrote.

In “Remedies,” for example, a mother comes to terms with the abandonment and infidelity of her daughter’s father. He has had another child with a woman broken by drink, who neglects even herself, and abandoned him, too. The first mother then starts picking up her ex’s son every weekend, wanting him “to know he has a sister.” But after the fourth lice episode threatens not just her scalp, but also her daughter’s ability to attend school, the mother must make a choice, with heartwrenching consequences for children just learning the meaning of family:

“The next day, Mama put on a full face of makeup, ran mousse through her lice-free hair, and dropped Harrison off at his apartment on Grant Street. I waited outside in the car, looking up at the window I knew was his. I wanted to catch a glimpse of him, my only brother in the world. I watched until he finally appeared. With his skinny arms, he reached up, and closed the blinds. It was the last time we dropped him off anywhere.”

The plots of the stories in Sabrina & Corina may appear familiar at first glance, not because we have seen them on the page before, but because we’ve lived some version of them, their twists and turns quite possibly one of the reasons the phrase “stranger than fiction” exists, as in the title story, in which Corina falls out with her cousin and closest friend, unable to understand Sabrina’s inner turmoil and what it wants to tell Corina about herself:

“By our mid-twenties, I saw Sabrina less and less. She worked nights. I worked days. She moved a few times and I lost track of her addresses, the names of her friends, the men she dated, the bars she tended. She rarely went to family dinners, but when she did, she was puffy-eyed and sallow-skinned, her slinky tops always falling off her shoulders. She’d gulp cups of black coffee like water, laughing at her own jokes, her hair swinging over my grandmother’s table. After some time, we both stopped calling and, for a while, I thought she was fine with that.”

See? We think we know this story. But later, when Corina is forced to be the one to apply makeup to Sabrina’s dead face and strangled neck, to “fix” things so family can bear to say goodbye, we know: This story is Kali Fajardo-Anstine’s and hers alone:

“I considered checking the backside of her neck for bruising, but I realized that no one, not even my grandmother, would see. Sabrina was forever to face ceilings and casket tops padded in pink satin, and once she was lowered into her grave, her throat would collapse, slowly disintegrating into the dark.”

But the delicate prose and the restrained, patient, plots are only some of the reasons for the well-deserved interest around this debut collection. There’s the praise from Sandra Cisneros, who said that “these stories blaze like wildfires,” while writer Ann Beattie put it like this:

“Kali Fajardo-Anstine writes about hard truths in women’s lives so knowingly, and with such a deft touch, I felt hyperalert, as well as implicated and imperiled. The book is about belief, coping, yearning, and proceeding in spite of adversity (that is, the times we stay alive). The final act of the first story tells us everything we need to know about what territory we’ll be entering: In these achingly convincing stories, the writer is writing delicately, symbolically, about mortality itself.”

“Kali Fajardo-Anstine’s stories move through the heart of darkness and illuminate it with the soul of truth. Comparisons came to mind: the Alice Munro of the high plains, the Toni Morrison of indigenous Latinas—but why compare her to anybody? She is her own unique voice, and her work will easily find a place, not just in Latinx literature but in American literature and beyond. Can you see me? I’m giving this collection a standing ovation! Can you hear me? I’m calling out Brava! Brava! to Kali Fajardo-Anstine from a new fan and aficionada of her work.”

If nothing else, consider the contributions of these fabulous writers, consider their enthusiastic praise for Sabrina & Corina, and then go find yourself a copy of this thrilling, touching, beautiful book.