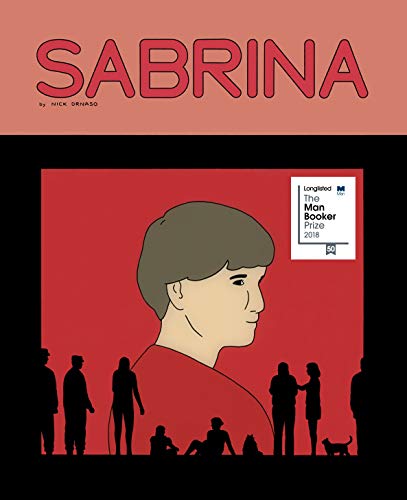 “Sabrina is not just an engaging story, it’s an important story—maybe not the best book of the year, but certainly the best book about the times we live in.”

The first graphic novel to be long-listed for the Man Booker literary prize, Sabrina is a powerful story enhanced by its medium and shows off exactly what graphic novels can do. The story is disturbing, sad, and holds up a fractured mirror to both humanity and the times we live in.

In Sabrina, a young woman disappears, and her boyfriend Teddy, distraught to the point of dysfunction, visits Calvin, an old high school friend. Calvin is in the Air Force and works on cybersecurity, and takes Teddy in to live with him as he’s lonely in the aftermath of his wife and child leaving him. Calvin takes care of Teddy while also connecting with Sandra, Sabrina’s sister. Teddy and Sandra are in shock, which grows worse as a videotape emerges and goes viral.

The result is horror for those who loved Sabrina, not only because of what they see happened to her, but because conspiracy theorist media personalities grab onto it and denounce everyone involved as part of a government hoax to desensitize the public. Calvin and Sandra find their lives and identity dissected online and then begin receiving death threats, turning their world into a paranoid nightmare.

In this aspect, the book mirrors the real-life experiences of families of children slain in school shootings such as the December 2012 murders of 20 small children and six adults at Sandy Hook Elementary School. Radio personality Alex Jones denounced it as a “false flag” operation and the people involved “crisis actors.” As a result, the families were harassed, one family to the point of having to move six times. To an extent, Sabrina puts you in their shoes.

The story rolls out like real life, right down to numerous conversations about everyday things and empty polite exchanges. The art is minimalist and frequently without dialogue, often showing the characters moving around through empty spaces or staring blankly. This makes the horror all the more effective, the grief and sadness and paranoia more powerful, by grounding it in the mundane. Many panels don’t reveal what the characters are thinking or feeling, asking you as the reader what you would be thinking and feeling.

The ideas are similarly powerful, providing a strong subtext to these mundane actions. Everybody—from Sabrina’s killer to her family to Calvin lending a helping hand to the crazies harassing him—are simply trying to fill the emptiness of their lives with a meaningful act or narrative. Everyday courtesy and kindness that is everywhere in this book–as it is in real life—are contrasted with the horror of the murder and the casual cruelty of human beings acting out online.

Those looking for a conventional story structure may be disappointed. Things more or less will work out, as the characters process their grief and try to move on with their lives. But they also will never work out, as what happened to them, and the scrutiny they receive in conspiracy mythology, will follow them the rest of their lives.

Sabrina shows what it’s like to be a parent of a child killed in a school shooting and subjected to systematic scrutiny and abuse by anonymous strangers demanding that you, sometimes under threat, deny your grief and confirm their version of reality. It shows how the human search for meaning in existence can both find expression and be distorted by technology that enables murder to be broadcast, like-minded people anywhere to join in witch hunts, and elaborate make-believe narratives to form from crowds.

As such, Sabrina is not just an engaging story, it’s an important story—maybe not the best book of the year, but certainly the best book about the times we live in.