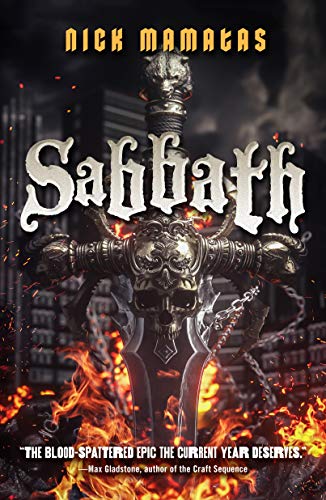 The infamous 11th century warrior Hexen Sabbath is plucked from death and certain damnation by a being claiming to be an angel of the Lord, and finds himself dropped into modern day Manhattan with no clothes, no weapons, no resources, and one mission: to track down and kill the living personifications of the Seven Deadly Sins before they bring about Armageddon. With time running out and his only ally a destitute art gallery owner, Sabbath must fight his way through New York's elite and challenge the world's most powerful man, or an eternity of suffering will be his, and our, only reward.

“The eyes of Hexen Sabbath burned as though the sun had swallowed him. His mother, the prophecy, the curse of his name, the reality of death, of Hell, weighed him down like bones of molten lead.”

Sabbath by Nick Mamatas is a highly entertaining and action-packed blend of explicit horror, history, and satirical fantasy all loosely based on the writings of fellow graphic novelist Matthew Tomao. Mamatas is the author of several novels that include The Last Weekend (2014) and I Am Providence (2016). He is also the author of an expansive collection of short fiction writings that have appeared in numerous publications.

“Like Christ, you journeyed to Hades . . . and ascended to Earth . . . empires have fallen, new ones risen. But some things remain the same, Hexen Sabbath. This world is a fallen one, beset by sins. The seven deadly sins.”

Reader be warned, Sabbath is filled with an overabundance of realistic depictions of sex and violence; however, these portrayals are not gratuitously titillating but essential to the simple story: that an ancient warrior has had to physically manifest in modern day New York City to eliminate the seven deadly sins through violence acts that will ultimately save the world from obliteration. Easier said than done.

“How many more times, how many more women, could he lay before he saved the world and all his sins were forgiven . . . or before he failed and the world ended? Sabbath realized that he would have plenty of company in Hell. She reached out to dim the lights in the gallery. Sabbath was amazed. Jennifer had been so wanton.”

Overall, Sabbath is an entertainingly vivid, blood-soaked, sexually charged page turner that is freshly conceived and surprisingly poignant in its ultimate revelations. Mamatas does an excellent job of weaving thought provoking and humorously snappy dialogue into the story. His excitement in telling this type of tale (a subject he knows very well) is unmistakable and profound. A highly recommended read for anyone with a keen interest in violently graphic horror/ fantasy novels.