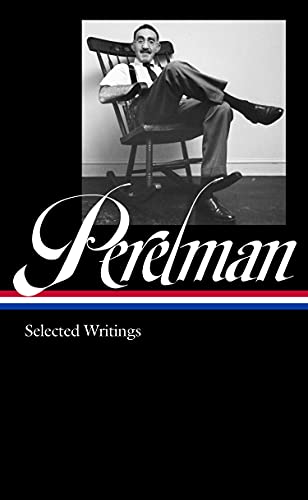 The humorist S. J. Perelman (1904–1979) was an American original. His work has sat little-noticed in a Fireside trade paperback edition for years. Now his Writings—the perfect title for this mishmash of “sketches and satires,” plus a play, autobiographical fragments, and letters—joins the pantheon of handsome Library of America editions of work by classic authors like Emerson, Twain, and Roth.

Brooklyn-born, Sidney Joseph Perelman grew up in Providence, RI, attended Brown University, and wrote primarily for The New Yorker, where he was a mainstay in the 1930s and 1940s. His surreal short pieces, written in a deeply personal style, parodied and ridiculed all aspects of American popular culture, from advertising to extravagant genre fiction.

“I came down the sixth-floor corridor of the Arbogast Building, past the Worldwide Noodle Corporation, Zwinger & Rumsey, Accountants, and the Ace Secretarial Service, Mimeographing Our Specialty. The legend on the ground-glass panel next door said, ‘Atlas Detective Agency, Noonan & Driscoll,’ but Driscoll had retired two years before with a .38 slug between the shoulders, donated by a snowbird in Tacoma, and I owned what good will the firm had. I let myself into the crummy anteroom we kept to impress clients, growled good morning at Birdie Claflin. . . . I kicked open the bottom drawer of her desk, let two inches of rye trickle down my craw, kissed Birdie square on her lush, red mouth, and set fire to a cigarette.

The sketch goes on in its light, inconsequential way, skewering Chandler’s hard-boiled cliches and poking wicked fun with puns, non sequiturs, and other verbal gymnastics. For the reader, the great pleasure is not in getting to the satisfying conclusion of the piece, but mainly in enjoying the inventive play of Perelman’s words as they fill his sentences.

His delight in language is celebrated, says editor Gopnik, in “entire paragraphs as beautifully and intricately constructed as a Rube Goldberg machine, with cliché backing into argot flirting with Broadway slang, Yiddish and British pretension side by side.”

An avid reader of literature, both high and low, Perelman touts trade publications like Corset and Underwear Review, offers a Christmas spoof inspired by playwright Clifford Odets (“Waiting for Santy”), and has a grand time lampooning advertising copy:

I suppose you’ll think I’m a silly little goose to write this, but I felt I simply had to apologize for Eliot’s behavior the other evening at dinner. Also, I can’t resist any opportunity to use my new Parker 51, which, as you know, takes the drudgery out of correspondence. Did you realize, by the way, that its patented Vacuum-Flo suction barrel, embodying a revolutionary concept in pen styling, guards against seepage? Yes, it’s good-bye to ink-stained fingers and annoying blots.”

Perelman’s writing is undoubtedly old school. Such short sketches once filled the pages of The New Yorker. His still entertain because of their wonderful wordplay. The same use of language characterized his well-known writing for Marx Brothers movies like Monkey Business (1931) and Horse Feathers (1932).

Great fun to browse in, Writings is the work of a master craftsman who never took himself too seriously, having taken up writing because he “never learned to pick pockets.”