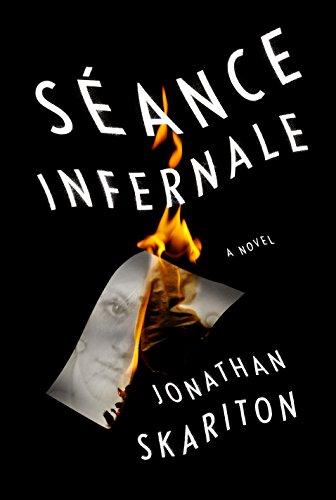 Alex Whitman is a successful movie memorabilia dealer, “part archeologist, part detective” who is widely known to be able to locate any object related to the film industry.

“His almost photographic memory of catalogs, locations, and specifications allowed him to beat out collectors and dealers who wagered thousands of dollars depending on whether . . . a film reel found in the depth of a dank basement contained lost scene or desirable splices.”

In the autumn of 2002, Whitman is hired by eccentric film collector Andrew Valdano to find and piece together what could be fragments of the first film ever made, Séance Infernale. In 1890, its creator, Augustin Sekuler, planned to unveil his “motion picture machine” to the public.

He boarded a train headed from Dijon to Paris, but never arrived at Gare de Lyon train station. Sekuler and his invention mysteriously disappeared somewhere along the way, and his claim as the creator of the moving picture vanished with him.

A modern day search to solve the mysterious disappearance leads to curious discoveries that may (or may not) shed light on Sekuler’s darkest secret. While searching out these answers Whitman’s investigation takes a personal turn. Two years before Sekuler’s own disappearance Whitman finds out that the inventor’s young daughter disappeared under suspicious circumstances. In a weird coincidence Whitman’s five-year-old daughter, Ellie, had also disappeared in Edinburgh never to be heard from again—a macabre kinship the two men would share nearly a century apart.

“Her disappearance had marked the last in a number of high profile child kidnappings that had prompted fear throughout the city of Edinburgh, beginning with the kidnapping and death of Danielle McKenzie in February of 1984, followed by a series of further abductions.”

The search for the elusive Sekuler film was now personally intermingled with the police investigation of an unapprehended serial killer. When Whitman successfully tracks down what could be fragments of Sekuler’s lost film, the discovery raises more questions than it answers. Could the greatest mystery in the history of film involve a train, a disappearance, a grieving family, and a possible patent war?

Séance Infernale is Jonathan Skariton’s debut novel. In it the author pays loose homage to the action adventure/ supernatural thriller genre that spawned novels such as Dan Brown’s The Da Vinci Code. The basic plot of Skariton’s novel bears resemblance to a series of unexpected trap doors that pop open and closed, and although this technique is very clichéd it lends just enough intrigue to keep your fascination.

Overall, the initial plotline is satisfactorily captivating: Movie memorabilia hunter traverses the globe in search of the first motion picture only to discover the film has a dark and supernatural theme and history. After that the story takes on a murky and chaotic journey that involves a psychotic serial killer roaming the streets of Edinburgh with an unbelievable and unnecessary personal connection to the protagonist.

On a whole, Séance Infernale is an entertaining read, and the horror and constant pain of Whitman’s personal loss is poignant, heart wrenching, and palpable: “It was easy to surrender to the painful nostalgia of Ellie’s memory. At night in bed, if he closed his eyes, in that gulf of space perception before falling asleep, he could see her, a warm and miraculous fantasy. Wakefulness would take away what he’d glimpsed and he’d experience the loss all over again.”

The reader must be warned that the novel does contain explicit language and disturbing descriptions of sexual acts, gruesome death scenes, autopsies, rape, and murder. Although these unsettling and often unnecessarily graphic descriptions are titillating and not for the faint of heart; the gothic and supernatural atmosphere of the novel is its most engaging facet and this alone will most certainly keep the average mystery/ thriller reader on the edge of their seat until the heart pounding final pages.