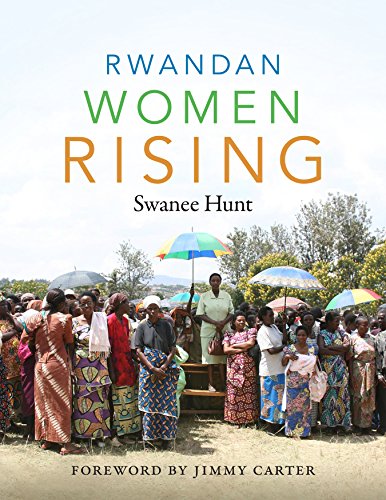 Anyone interested in gender equality is by now used to Rwanda coming very high on the international gender scoreboards. The World Economic Forum’s Global Gender Gap Index currently places Rwanda in sixth place after Ireland and before the Philippines, with the USA at 45th!

The question often asked is—if this is really the case—what has made the situation in Rwanda different from that of other countries who have experienced genocide, and are there lessons to be learned?

In Rwandan Women Rising, Swanee Hunt, who has worked on women’s leadership in many post-conflict situations, examines women’s roles and status in Rwanda from pre-colonial times to the present, though the heart of the book is the testimony of some 70 women who were influential in rebuilding post-genocide Rwandan society.

By presenting their stories Hunt shows that Rwandan women did not seek to build a gender equality movement and to become top of those international scoreboards, but rather as survivors from all ethnic groups organized around common problems such as health care, housing, and poverty to serve their communities first and then the nation.

While there are several well-known activists and politicians among their number, victories on such issues as inheritance rights, rape, female entrepreneurship, reproductive rights, education for girls, and mental health were a result of their sinking their former societal differences in collective action.

The book also shows the importance of sustained political leadership from the top, which supported efforts to establish institutions such as the Women’s Councils, and the Ministry for Gender and Family Promotion, as well as ensuring women’s growing presence and influence in parliament—in 2008 women secured 56 % of parliamentary seats—a global first, and in the National Unity and Reconciliation Commission.

A nod of acknowledgement is even given to the beneficial effects of Rwanda’s attendance at the UN’s Fourth World Conference on Women held in Beijing in 1994, though overall the importance of development aid seems underplayed.

The stars of the show and the most enjoyable parts of this rather long book are of course the women contributors. It would perhaps have been helpful to hear from some more male voices, and some less starry eyed contributors of both sexes. The book would have benefited from a more analytical authorial voice throughout.

This is an important book on a gripping topic and certainly not the last word.