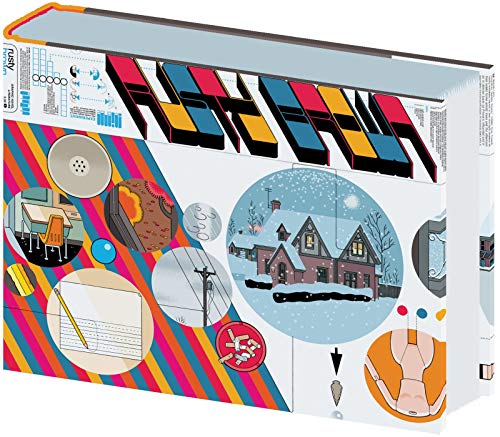 “Rusty Brown is a masterful study of ordinary American humanity. It’s not a balanced study, and its approach is observational without political engagement, a kind of white default that matches the book’s cultural milieu.”

Rusty Brown is a massive book, a tome of a graphic novel, interlinking stories through space and generations. The titular Rusty is an odd, awkward child, deeply in love with his Supergirl action figure and perpetually infuriating to his father. After overhearing his parents’ high-volume exchange, “I don’t care how goddamn old he is—he can still shovel a goddamn driveway!” Rusty becomes convinced that he has super-hearing. He is destined for some greatness, if he can only find a focus.

But Rusty, like so many other characters in this book, is fundamentally wrong about his own greatness. His frantic need for grandeur is a stopgap against the ennui of endless winter, daily humiliation, and personal inadequacy.

Childhood discomfort is ultimately subsumed by the book’s layers of adult sorrow. Miss Cole, teacher and lone black woman in the story, mutters to a coworker, “It’s . . . just like I woke up one day and—I—I just can’t account for the intervening twenty years . . . It’s like I’ve been living in a dream, y’know?” The dreamlike nature of the book, which flows impressionistically from one uncomfortable moment to another, is reinforced by whiteness: white characters, white snow, white sky.

Ware has created the antithesis of a lush world. In keeping with the color theme, “Chalky” and Alison White arrive at the same school, suffering from the heightened awareness of new kids.  Alison mutters, “weird weird weird this place is so weird.” It’s a weirdness born of unfamiliarity mixed with the deep discomfort of living, brutally exposed in ordinary life.

Rusty Brown’s father “Woody” slides into his own past narrative of lost love and frustrated science fiction literary ambitions. His single published tale, “The Seeing-Eye Dogs of Mars,” is striking and brutally dark. Its bleakness provides a sharp contrast to the author’s own past. What serves as rugged, uncompromising masculinity in hard-boiled fiction becomes absurd or tragic in the ordinary world. A character might soliloquize, but the man who reflects, “Why does the brain play such cruel tricks on itself? What part of my psyche was benefitting from torturing me at a moment of such otherwise desperately earned bliss?” is in a purgatory of his own making.

The book’s focus on men’s discomfort and women’s inscrutability makes the two women’s stories within the novel feel like oddities. Yet the most engaging story within the novel is Joanna Cole’s. Her life is wide-ranging and complex. Her interests go far beyond sexual ennui or simple moments of humiliation. She and her sister disagree profoundly about their roles as black teachers in a predominantly white, wealthy community.

Certainly, Joanna is an outsider. Ware chronicles the microaggressions of Joanna’s career. A (white, male) colleague’s passive aggressive rant emphasizes her outsider status: “As I’m sure you’ll agree, we’ve already gone out on something of a limb by having you begin in such a prominent position last year the lower school . . . if you ‘catch my drift.’ Because some of our parents . . . many of them from very well-to-do backgrounds and high profile positions . . . might be extending you a certain . . . charity to you in your position . . . and that charity might not exactly be helped along if one of them visits your classroom and finds it smelling of cigarettes, now, will it?” Still, it’s frustrating that Joanna is never given more space to react than an occasional headache or sigh. Her misery remains repressed and silent on a stage where men’s fury is given enormous scope.

Ware’s characters’ voices are vivid, and their inflections are subtly clear. In that sense, Rusty Brown is a masterful study of ordinary American humanity. It’s not a balanced study, and its approach is observational without political engagement, a kind of white default that matches the book’s cultural milieu. In this, Rusty Brown is enormously ambitious but not entire fulfilled. Its very ambition points to the ways in which the book fails to push beyond its boundaries.