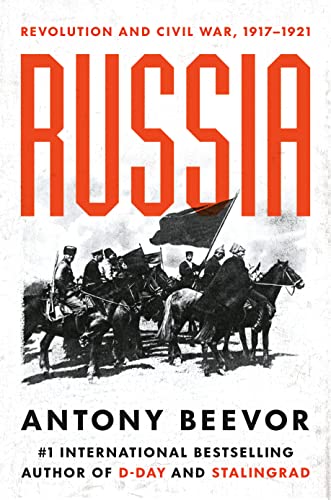 “Beevor, who has written acclaimed books about the Second World War, presents a richly detailed account of the momentous four years of Russian history between 1917 and 1921.”

In the concluding chapter of his new history of Russia’s 1917 revolution, Bolshevik coup, and subsequent civil war, the renowned British historian Antony Beevor writes, “For far too long we have made the mistake of talking about wars as a single entity, when they are often a conglomeration of different conflicts, mixing national resentments, ethnic hatreds and class warfare.” It is a brilliant observation and certainly applies to the First World War and its immediate aftermath in Russia.

Beevor, who has written acclaimed books about the Second World War, presents a richly detailed account of the momentous four years of Russian history between 1917 and 1921. They were momentous because so much of 20th century history flowed from those events. The great American diplomat and historian George F. Kennan once wrote that in trying to understand that century all the lines of inquiry lead back to the First World War.

And Beevor’s new book presents the fateful events of those years in Russia in all their complexity and variety. The events he describes occurred over the vast Eurasian landmass and involved Russians, Germans, Cossacks, Latvians, Poles, Ukrainians, Finns, Kalmyks, Czechs, Japanese, Americans, Britons, Frenchmen, Chinese, and other peoples. Russia itself was (and is) a country of many nationalities and languages. And if at times it is hard to follow the sequence of events in the civil war, Beevor’s command of the subject matter in all its varied detail is remarkable.

The Russian Revolution of February–March 1917 was caused by many factors, including a corrupt, repressive, and politically blind monarchy and government, the poor living and working conditions among most Russians in urban areas and in the countryside, and the devastating impacts of the suicidal First World War.

And when the Romanov dynasty lost power in a popular revolution, it was replaced by a weak and ineffectual Provisional Government that made the crucial mistakes of continuing Russia’s participation in the war and freeing revolutionary ideologues, especially Lenin’s Bolsheviks, who had a greater “will to power” than the new government’s ministers.

Beevor devotes about one-fifth of the book to the events that led to the Bolshevik seizure of power in October–November 1917. It was during the evening/morning of October 26–27, 1917, that Lenin declared to his Bolshevik comrades: “We shall now proceed to construct the Socialist Order.”

But to do that, the Bolsheviks first had to politically marginalize their leftist allies—which they did in short order—then militarily defeat their domestic opponents on the ideological center-right, which led to the terrible and extremely brutal civil war to which Beevor devotes the bulk of the book.

Beevor estimates that Russia’s Civil War “led to the deaths of up to 12 million people, the utter impoverishment of the whole country and suffering on an unimaginable scale.” He tells the story of the civil war month-by-month in multiple geographical regions, examines battles large and small, assesses military commanders on both sides, explains the motives and efficacy of allied interventions, and describes the large-scale cruelties and atrocities perpetrated by the warring parties.

The Russian Civil War is commonly and conventionally described as a conflict between the “Reds” (the Bolshevik regime and army) and the “Whites” (the opposition forces). But as Beevor shows, while the Reds were disciplined, organized, and benefited from internal lines of communication, the White forces had differing political aims and were geographically dispersed.

White commanders, like Admiral Alexandr Kolchak, Gen. Anton Denikin, and Gen. Baron Piotr Wrangel, vied with each other for political preeminence, troops, and supplies. Both the Red and White forces sought allies among Cossacks and other peoples. And the civil war overlapped other conflicts, including a fierce Polish-Russian war. There was fighting in Petrograd (formerly and later St. Petersburg), near Moscow, in Tsaritsyn (later Stalingrad), Ukraine, the Caucuses, Crimea, Siberia, and elsewhere.

Bolshevik leaders believed that their revolution would ultimately spread to other countries in Europe and then to the rest of the world, which is why they created the Comintern as the instrument of global revolution. And to ensure the survival of the communist regime in Russia, they established the Cheka, the secret police that was the forerunner to the NKVD and KGB.

Cameo appearances in the book include Winston Churchill, who as a member of the British cabinet sought to help the Whites defeat the Bolsheviks; Halford Mackinder, the great geopolitical theorist who served as British High Commissioner to South Russia during the civil war; American Col. William Donovan, the decorated World War I hero who later became head of the World War II Office of Strategic Services; and American Col. Robert Eichelberger, who fought alongside Japanese forces in Russia and who later fought under Gen. Douglas MacArthur to defeat Japan in World War II.

Beevor notes that the war swayed back and forth, and there were times when it appeared that the Whites could prevail. Churchill wanted to form a great anti-Bolshevik alliance to strangle Bolshevism in its cradle, and both he and Mackinder predicted that a Bolshevik victory would result in future global problems. How right they were. But neither the White forces nor the allied countries that intervened coordinated their anti-Bolshevik activities—and that fatally undermined their efforts.

Some historians and political scientists still cling to a belief that Josef Stalin perverted Marxism into a repressive dictatorial regime of terrible cruelty. Beevor’s book, however, should dispel any remaining doubts that Stalinism was a fulfillment of Marxism-Leninism. All of the tools of repression and cruelty—forced labor camps, widespread torture and terror, the elimination of class enemies, state-induced famine—were all instituted by Lenin during the civil war.

Beevor concludes this magisterial history by noting that “[f]ratricidal wars are bound to be cruel because of their lack of definable front lines, because of their instant extension into civilian life, and because of the terrible hatreds and suspicions which they engender.” The cruelties Beevor recounts were, in his words, “beyond belief” and “unspeakable.” And while the Whites sometimes “represented the worst examples of humanity, [f]or ruthless inhumanity . . . the Bolsheviks were unbeatable.”