Ruse: Lying the American Dream from Hollywood to Wall Street 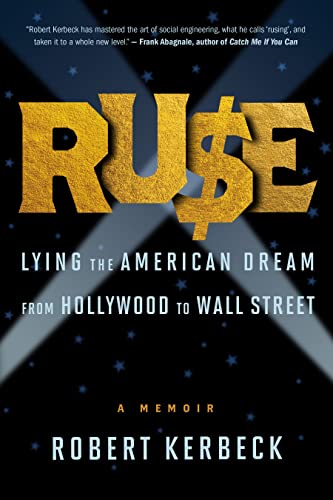 “With enjoyable, au currant language, and a sharp ear for dialogue, Kerbeck’s astounding story is fraught with tension, written in a voice both confident and accessible throughout an insider’s memoir . . .”

In Robert Kerbeck’s electrifying memoir, Ruse, the author comes out swinging, “Not everyone can do what I do. In fact, almost no one can. This is not self-aggrandizement. It’s a cold fact. Rusing takes a degree of sophistication and creativity and fortitude (and ethical elasticity) most people can’t summon. But by far the most important trait to make it as a telephone criminal is the gift of gab.”

The author is so equal to the task that introducing “rusing” as a verb is entirely acceptable, once one is hip to the insider’s meaning as depicted in this multiple storyline exposé of corporate spying, written by a once struggling actor unwittingly drawn to the trenches of one of the more dubious lines of work imaginable.

It is 1987, and Robert Kerbeck, a University of Pennsylvania graduate, dashes his father’s expectations of staying employed by the family’s Philadelphia, third-generation car dealership, in favor of taking his leading man looks to New York, after a handful of thespian successes ignite his ambition.

Once settled in New York and looking for the requisite “survival job” while establishing an acting career, the author shares, “I heard about a part-time job with flexible hours that sounded like exactly what I needed. The details were murky, but, really, how bad could it be? I figured any job that didn’t require a suit and tie—or an apron—was all right by me.”

Forty-something-year-old Leona lives on Manhattan’s Upper East Side, and is the boss of Kerbeck’s friend, Pax, who gets him an interview. Leona ushers Kerbeck “inside the cleanest apartment I’d ever seen. Everything seemed to be in perfect order, as well as white. Her living room looked ready for an Architectural Digest photo shoot.” Kerbeck intuits, “Whatever her business was, it was lucrative.” When Kerbeck tells Pax that Leona hired him at eight dollars per hour, for what he assumes is telemarketing, Pax reveals, “She hires everyone . . . Because nobody works out.” Kerbeck concludes, “It was only then I realized that Leona hadn’t asked about my phone skills or sales skills—or any skills, really. She’d not said a word about what the job actually entailed. For that matter, neither had Pax.”

Kerbeck’s new job has nothing to do with phone sales; it involves ferreting out competitive Wall Street companies’ non-public information from their organizational charts, as in who reports to whom, job titles, and phone numbers within financial institutions for the purposes of satisfying Leona’s desperate-for-information executive search clients, whose headhunters used these up-to-date charts to identify the best people and recruit them away to their clients. It does not escape Kerbeck that extracting such information walks a creative, thin line, and acting abilities come in handy in performing what is essentially a ruse. In the beginning, it’s an innocuous enough way to subsidize his acting career. Kerbeck confesses, “At the time, it didn’t bother me. I was young. I wasn’t going to be doing this forever. I was going to be a successful actor.”

With acting as his career focus, Kerbeck takes us along for the ride of an ambitious actor’s trajectory when given a series of breaks. He receives a rave review in The New Yorker as the lead in an off-Broadway show opposite a young Calista Flockhart and, through the years, goes on to become a committee member of the famed Actor’s Studio, rubbing shoulders with such luminaries as Paul Newman, and Joanna Woodward; James Lipton; Kevin Spacey; George Clooney; and O.J. Simpson, each hard-won encounter more astounding than the next as he rides the fickle waves of fame, with each brush all the more a fascinating story.

In rationalizing his day-job, Kerbeck says of himself and fellow rusing co-workers, “I didn’t think much at the time about the legality, let alone the morality, of what we were doing. We were actors. We needed a job to support our art. What was the harm anyway? We weren’t stealing trade secrets. We weren’t dumpster diving or hacking. We were simply obtaining lists of employee names. Those people were then called and offered better jobs. How could that be a bad thing? It seemed to be a victimless crime—if it was a crime at all.”

In time, Kerbeck grows to become a seasoned and sophisticated ruser, and the attention to intricate detail is riveting. Now mastering the game, he grows confident in technique and vacillates between impersonating a lawyer, an accountant, an auditor, and company employee, all in the name of rusing for high-paying information.

It is risky business, this rationalized lying, but as the stakes rise, the potential for millions in payoff is well worth the gamble. Kerbeck’s world expands, he moves to the west coast, and as his acting career takes a back seat, his Malibu lifestyle flourishes, up until the 2008 financial crisis, when, “the flow of work stopped instantly, like a switch had been flipped off.” Kerbeck says of the times,” My research for the years leading up to the crash had every name in every group at every firm responsible—directly or indirectly—for the gutting of the global economy that resulted in the worst financial crisis since the Great Depression. And I’d actively helped them get better jobs for even more ludicrous amounts of money so they could do even more damage.”

Author Robert Kerbeck excels at clear, direct explanation of what is basically the shady, double-dealing, high-finance world populated by people one-upping each other through duplicitous practices lurking in the gray areas of legality. With enjoyable, au currant language, and a sharp ear for dialogue, Kerbeck’s astounding story is fraught with tension, written in a voice both confident and accessible throughout an insider’s memoir so finely wrought, it reads somewhere between a heart-pounding thriller and an intriguing, finely tuned spy novel.

Claire Fullerton is a staff reviewer at New York Journal of Books.