Running with Sherman: The Donkey with the Heart of a Hero 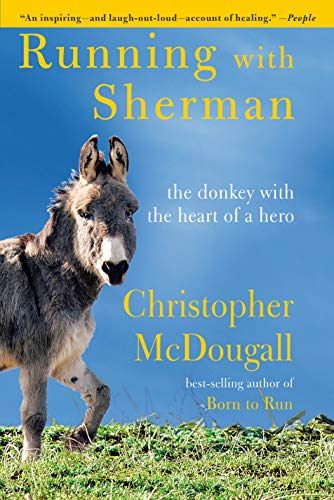 “a fun and inspiring read, not just for runners, but for anyone who believes in the healing power of the human-animal bond.”

When Christopher McDougall and his family rescued a little gray donkey from a hoarder near their home in rural Pennsylvania, they weren’t sure the creature would make it through the night. His hooves were so overgrown he could barely move, he was infested with parasites, and his teeth were rotting away.

A year later, in 2016, Sherman and McDougall ran 15 miles together in the world championship of burro racing in Colorado. What happens in between is chronicled in McDougall’s latest book, Running with Sherman, a charming story of rehabilitation, teamwork, athleticism, and the healing power of love between people and their four-legged companions.

Even though McDougall himself is an accomplished distance runner—his bestselling book Born to Run recounted his adventures training for a 50-mile race in Mexico—he didn’t initially consider running as a path to rehabilitation for Sherman. Then his neighbor Tanya, a veterinary technician, advised him that donkeys have to feel like they have a purpose in life. “You need to find him a job,” she said.

So McDougall set his sights on the burro-racing championship, and he enlisted his wife, Mika, their two daughters and Tanya to help him train Sherman. Two other donkeys, Matilda and Flower, came along for the training sessions, helping to bring Sherman out of his shell.

McDougall has a colorful writing style that brings to life the animals’ personalities, as well as the various obstacles they encounter during their year of training. One day McDougall decided to challenge Sherman to run on an off-road dirt trail that went straight uphill to a farm. At the end of the trail lived two horses that loved to greet visitors “by thundering across the meadow like demon steeds of the Apocalypse and skidding to a stop, nostrils flaring, just inches from the wire.” McDougall figured Sherman would shy away from the challenge, but the donkey took off instead, bolting toward the farm and not stopping until he ended up “touching noses with the two big warhorses.”

As vivid as McDougall’s descriptions of his time with Sherman are, the author’s depiction of the humans involved in the donkey’s quest are even better. One of the people who eventually joined Sherman’s training team was Zeke, a Penn State University student who had to take a semester off due to a bout with depression. Zeke bonded so closely to the donkey in the process of running with him that he showed up at the championship to cheer on Team Sherman, even though a broken foot prevented him from racing. For Zeke, hanging out with the recovering donkey proved the perfect remedy for his own depression.

Sherman, wrote McDougall, “looked so happy these days—so strong and self-assured—that it was sometimes easy to forget that for all the healing he’d gotten from Zeke, he’d given as much in return.”

Running 15 miles with donkeys is quite a different challenge than the 50-mile race McDougall tackled for his earlier book, but there are still plenty of technical details in Running with Sherman that athletes will surely appreciate. Donkeys are notoriously unpredictable—prone to sudden stops or random kicks that can hobble their human companions. That makes the training all that more challenging for burro runners, who must master the art of covering long distances while tethered to a donkey by a rope.

McDougall describes all of it with exquisite detail, making Running with Sherman a fun and inspiring read, not just for runners, but for anyone who believes in the healing power of the human-animal bond.