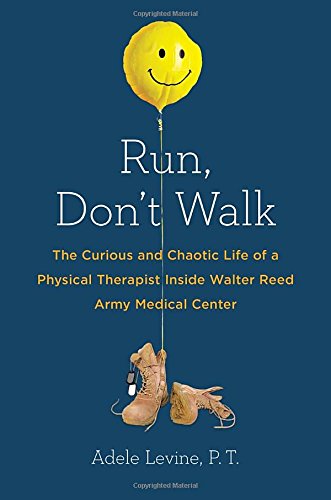 “Levine shines a light on the lives of soldiers and their families after the (perhaps) heroic welcome and the crowds have stopped cheering. It focuses on the time when it is up to them to cobble a life out of what is left of them.”

Run, Don’t Walk is a series of essays, each of which stands on its own, yet all of which connect. They provide a veritable “crazy quilt” picture of life at Walter Reed Army Hospital’s Amputee Clinic. And crazy it is.

Author Levine spares no detail, folding in human vice and virtue along with day- to-day realism of a world that few of us know. It is Walter Reed in the dark times of the Iraq and Afghanistan conflicts. She points out how the advances in trauma care have helped to save lives, but also created a huge caseload of severely disabled soldiers in need of sophisticated rehabilitation. She alludes to the inevitably of budget cuts at a time of surging numbers.

We meet a key protagonist, Cosmo, who is actually a fictionalized collage of several soldiers—a technique that preserves confidentiality yet graphically illustrates many of the realities experienced by recovering veterans.

We learn of the complications involved and precise skills required to fit a prosthesis and the buck passing between prosthetist (experts who construct today’s highly technical limbs) and therapist who continually argue, but also show mutual respect. Levine describes the skill involved by her colleagues in “ cleaning up a gait deviation with a few clicks of an Allen Wrench.”

We develop affection for all of the major players, including the author herself, who makes no bones about her own human frailties and her feelings about working day in and day out in such a high-stress environment.

The author tells us that she chose physical therapy “because the hours were good and because it was a career that would spare me the heart-wrenching details of some of the other medical professions, notably death and terminal illness. It was a job that, at the end of the day, I could leave behind at the office. But that’s not how it turned out at Walter Reed. Even when I physically left the clinic, . . . I couldn’t keep my thoughts from flickering back to work. . . [where] everyone was struggling with how to live with devastating and permanent injuries.”

What is interesting is what is NOT said: “We never talked about the staggering injuries we saw. Why? To us it faded into the background of day-to-day normalcy. We were cheerful because we were living our lives inside the crowded theater that was the amputee clinic, where we played the role of therapist and soldier(s) played the role of patient and we entered stage left and exited stage right.” We encounter an endless line of celebrities and politicians—and even troops of clowns—who made highly visible visits. Some of them left in tears.

And yet the book is filled with irony and humor. For example, the item of choice for teaching an amputee balance and mobility turned out to be a set of five-dollar traffic cones, instead of the ultra high-tech, high-end treadmills and other devices supplied by the administration. The image of a child playing with the box in which an expensive toy is wrapped comes to mind.

Levine describes the signature pound cakes baked by Jim, a therapist who draws some reluctant veterans into the kitchen to join him in baking or eating and also allows them to forget that they are healing themselves in the process. Emma, another skilled therapist, provides a weekly lunchtime recitation of People magazine as workers gather to slurp up the juicy tidbits of gossip.

The author pokes some fun at the military modus operandi when the administration did not allow an electric coffee pot in the staff area. Instead, a staff member brought in an electric water kettle and another supplied a French press coffee maker—all in compliance with the letter of the law.

It is interesting to chart people’s reaction when mentioning this book in general conversation. It is either one of disinterest with eyes glazing over or outright groans. (“Wasn’t that depressing?”) To the latter question, the answer is “no.” Run, Don’t Walk did not produce angst or ennui. It is an honest account of one small section of a huge medical complex and a graphic commentary on the resilience of the human spirit.

Levine shines a light on the lives of soldiers and their families after the (perhaps) heroic welcome and the crowds have stopped cheering. It focuses on the time when it is up to them to cobble a life out of what is left of them. It should be required reading for any student or caregiver involved in post-war rehabilitation or even healthcare in general.