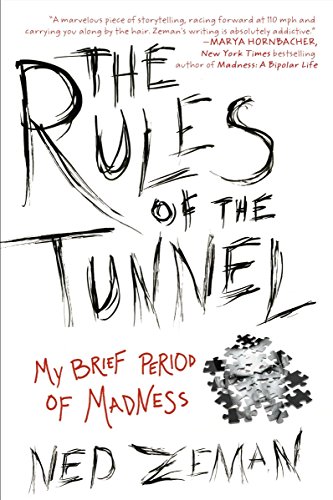 Who knew that reading a memoir about depression, mania, and amnesia could be so much fun? You read about Ned Zeman’s descent into madness and begin to feel a bit mad yourself. You wonder if you aren’t possibly bipolar. But you don’t feel depressed for a moment while reading this manic handbook of his journey through today’s mental health system.

Ned Zeman, a long-time writer for Vanity Fair, has that zippy, ironic, right up to the moment style. He knows his territory because that is what reporters do: They find out all there is to know about their topic. Add to that the experience he has had writing about eccentric adventurers who were about as manic as they come, who pushed all known limits, and who died young in places like Antarctica.

When depression settles in, when the meds can no longer get him out of bed, after therapist one through five fail to help, he goes the distance to “the treatment of last resort.” His experiences with electroconvulsive therapy, known back in the 1950s as shock treatment, are the truly creepy part of the story. He was warned about possible temporary short-term amnesia but like every thing else in Ned’s life, his experience was over the top.

Despite a team of close friends, a devoted girlfriend, and two loving brothers—all attempting to keep watch over him between treatments— he races from city to city, from woman to woman—and remembers none of it.

Ultimately, he must use his highly honed researching and profiling skills to reconstruct the two years of memory burned out of his brain by those pesky shocks. This is the only part you find hard to believe. If the human mind is capable of solving the problems of the human mind, Ned Zeman is living proof of that hypothesis.

In his case, it is a fitting sort of justice. Here is a guy who specialized in evasion, never quite completely forthcoming with his therapists, his employers, his girlfriends or his friends. Being dangerously self-involved and compulsively self-defeating, he appeared incapable of listening to the common sense advice from any of them.

Still, you can’t help liking and admiring this maddening individual. Because he makes life exciting and like many socially challenged artists, he attracts help and care wherever he goes. Lucky for him because, as he documents, most artists and writers who followed the path of meds, therapist, mental wards and shock treatment are no longer with us. Many of them never wrote again after “the treatment of last resort.”

If you have suffered from manic depression or bipolar disorder or the inevitable ups and downs of life, Ned Zeman’s memoir will make you think twice about taking those meds. He might just keep you out of mental hospitals all together. The surprising conclusion, which you don’t see coming, takes a mere three pages at the very end of the story. You should definitely read those last three pages.