Ruler of the Night (Thomas and Emily De Quincey) 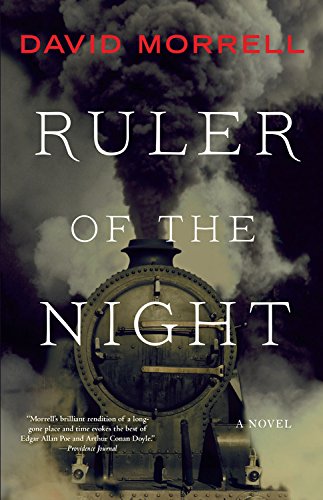 David Morrell has been called “the father of the modern action novel.” During his long career he has written more than 30 books, among them the spy thriller The Brotherhood of the Rose and First Blood, his debut outing that introduced the iconic character John Rambo. So Morrell took many by surprise when he embarked on a series set in Victorian England. More surprising: how well he pulled it off.

The Ruler of the Game is the third of David Morrell’s novels featuring the “notorious opium eater” and literary giant Thomas De Quincey (1785–1859), a real-life figure who achieved immortality with his autobiographical Confessions of an English Opium-Eater.

This time around a seemingly impossible murder is committed in the locked first-class train compartment next to De Quincey’s. With the murder practically falling in his lap, his intellect is engaged, and the race is on to solve the killing. But problems abound, not the least of which is that the victim is a top London solicitor and holder of secrets to many leaders of the kingdom. And then there’s the ever-present dilemma of De Quincey’s addiction, which continually drags him off the rails.

Scotland Yard detectives Sean Ryan and Joseph Becker soon arrive on the scene, and the partnership of four, inclusive of De Quincey’s single minded daughter Emily, is assembled for the third time. Further murders are committed. A bomb decimates a train platform. An arsonist creates havoc. The dangers increase in steady increments and before long the case is further complicated when a painful figure from De Quincey’s earlier troubled days reappears.

At once soft-spoken, brilliant, uncommonly observant, moody, and charming, Morrell’s De Quincey is a multifaceted character. And the novel artfully weaves fact and fiction together in an engaging tale. Among the former is the clanking, lumbering new-fangled steam locomotive, the first recorded murder on a train, and a curious water therapy called “hydropathy” known for its miraculous healing powers.

The sights, sounds, and smells of Victorian England spring to life under the author’s skilled hand. Horse-drawn carriages bustle down muddy, tavern-lined streets. The spoken language is colorful, charmingly Victorian, and elegant or rough as the case requires. With superb attention to detail and riveting scenes, Morrell offers up a gripping, multidimensional tale of historical intrigue that will resonate long after the final page is finished.