Rule of the Robots: How Artificial Intelligence Will Transform Everything 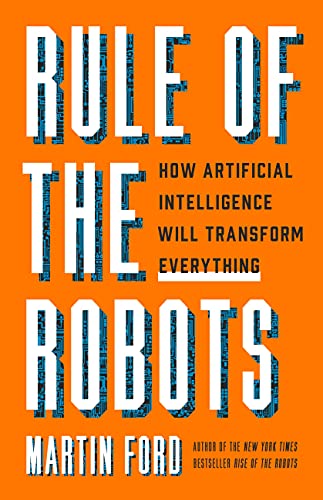 “This is a fun and informative book for those who want a good overview of the history, present, and future regarding what a world where robots might rule.”

Imagine a future in which Amazon’s Alexa is only the beginning. We have robots to clean our houses, cook our meals, and perform other sundry tasks. Self-driving cars take over the highways and streets. Automation renders working unnecessary, or at least frees us up for more leisure or creative time. A brilliant computer such as IBM’s Deep Blue or Watson finds the cure for cancer. This is the utopian vision that many including Elon Musk see. They project a paradise created by robots, and they will soon be so smart because of an artificial intelligence that they will any day now be able to solve the most pressing problems facing our society.

Any day was supposed to happen years ago, but we are still waiting for it along with Godot.

Rule of the Robots is a sobering and realistic assessment of what the future will look like with technology and robots guided by artificial intelligence (AI). For some such an Elon Musk, Larry Page (formerly with Google), or legendary computer wizards such as Alan Turing, AI will set us free. They project a world where AI will transform our lives for the better, predicting robots and technology will reach heights that rival what we see in science fiction movies. This book both endorses this view, but also questions all the hype and promise surrounding AI and robots.

Chapters one and two offer an excellent general thesis regarding the history of technology. By that, new technological advances have the capacity to disrupt the status quo. They are part of the creative destruction that comes with significant leaps in the way technology is deployed.

Economies often are built around a specific new technology, such as the case when electricity replaced coal or wood as a primary energy source. The same, too, is happening at an accelerated pace with the way the AI and robotics are being developed together to produce inventions that potentially will transform our lives. Chapter two articulates that hype and promises its developers preach in the new world of AI-assisted technologies. These are the messages we hear in the news, see in the social media, and witness across pop culture and in business and other trade publications.

Yet beginning in chapter three, the author lays out a more realistic vision of where AI and robots are. We are close in some respects to the visionaries’ dream, but it is still a dream. The claim was that already driverless cars would be taking over the roads that would be safer as a result of AI. But few think imminence is imminent. Driverless cars still face many technological problems in a real world that is far more complex than the laboratory in a closed driving course. While Alexa may be able to hear and satisfy some of our wishes, we are far away from a robot who can go to a crowded refrigerator and find a beer or an egg, and then use the correct grip to grab and not destroy either. We also are a long way off from developing a robot big enough and affordable to perform these and other household tasks.

Chapters four and five detail the challenges still present and which await building the machines that can perform they way they are promised. Martin Ford describes the overpromising, but he also explains in clear language the problems in replicating the human brain and the learning systems that need to be built for robots to have an AI that acts as hype asserts. Ford interviews leading developers and experts on the science and challenges of AI, pointing both to what we have already learned and what is still unknown.

Chapters six, seven, and right turn from utopia to dystopia. Robots and AI may set us free, but they could also un-employ us. Their great disruption will and is changing the economy, that comes with un- and underemployment. Robots and AI in the hand of sinister governments can be used in a nefarious way, used for spying and violations of civil liberties and democratic governance. Finally, and simply, as the conclusion points out, AI might never perform the way we hope, at least within the horizon of the present. Robots and AI will transform everything as the subtitle of the books declares, yet the transformation is ambiguous, and it could take many paths.

Martin Ford is one of the leading futurists when it comes to discussing the robotic and AI industries. One part of the book is singing the praise for these industries, and he passes along the excitement, promise, and hype in this book. But the reader will also like how he deflates some of the promises and exposes some of the huckerism and boosterism of modern-day Elmer Gantrys. This is a fun and informative book for those who want a good overview of the history, present, and future regarding what a world where robots might rule.