The Rule of the Clan: What an Ancient Form of Social Organization Reveals About the Future of Individual Freedom 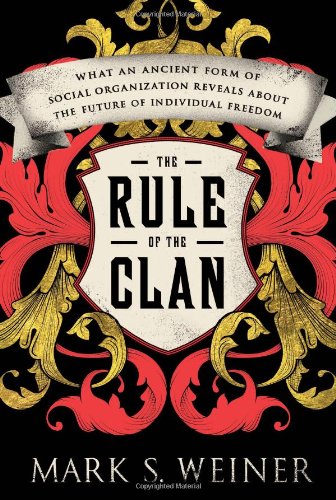 The Rule of the Clan: What an Ancient Form of Social Organization Reveals About the Future of Individual Freedom is an accessible, mesmerizing, and compelling argument for the importance of a strong central government in the quest to preserve individual liberty and economic freedom.

Mr. Weiner, an expert on constitutional law and legal history, writes about the yearning for identity and belonging that binds clan based societies together, regardless of whether those societies come into being where contemporary states have failed, or whether he is describing the pre-state clans of historic England.

He highlights and examines the critical elements in societies organized around extended family groups, namely group honor and shame, and a legal standard that deemphasizes the responsibility of the individual.

It is this, he argues, that is responsible for the absence in clan-based cultures of personal freedoms associated with modern liberal democracies.

Author Weiner extended the definition of clans from “social and legal organization centered primarily on extended kinship or linage groups to include collective groups from the well understood tribal based clans to modern corporations operating inside liberal democracies.”

He follows up on the definition by exploring the similarities between powerful corporations and clan based societies, demonstrating how both can undermine individual freedom.

Mr. Weiner presents a compelling case that only a “robust, effective, healthy, transparent, and legitimate state is capable of vindicating the public interest and therefore vindicating the individual as such, rather than as members of a collective group.”

He takes us on an intriguing journey inside these kinship-based societies, connecting the dots for us between weak statehood and subjugation of individual rights and freedoms. As such, his argument could stand against the prevailing naiveté that equates a weak or absent state with the triumph of the individual.

Of equal interest to the author, however, is the danger of underestimating the role and power of clannism, a system he defines as “a state captured by collective kinship organizations that treats citizens through the framework of patriarchy not as citizens, but as troublesome dependents.”

American power and prosperity is symbiotically tied to oil producing states, many of which fall into this category. In order to deal effectively with these states, American governments and corporations must develop an appreciation of how decision making, justice and power operate within them.

This is an important book, a must read for anyone wishing to understand these complex issues. Unfortunately, Mr. Weiner seems unaware of any culture that falls outside the two poles of individual freedom and clannish subjugation of the individual.

He does not address, for example, the contemporary hyperindividualism, in which family members feel zero obligation to each other, allowing fathers to walk away from their children and children to turn their backs on aging parents. This isolating hyperindividualism may well be a factor in nostalgic romanticizing of clans, a subject he explores in depth in this book.

He is also somewhat naive about the role of ancient clan systems in America. Using the example of a Scottish coat of arms displayed by clan descendants in a pub in Savannah, Georgia, Mr. Weiner suggests that the descendants of the clan have moved on. He does not recount prevalent anecdotes about Scottish priests having to be brought to New York in the 1970s to persuade Scottish immigrant to allow their children to marry, or the prevailing attitude among contemporary Scottish Americans that those who “marry in” are interlopers and enemies.

The Rule of the Clan is readable, engaging, thorough and fascinating. Highly recommended.

[The quotes in this review are not from the book. They are from an interview with the author conducted by Brain Lehrer on his show on WNYC on March 13, 2013.]