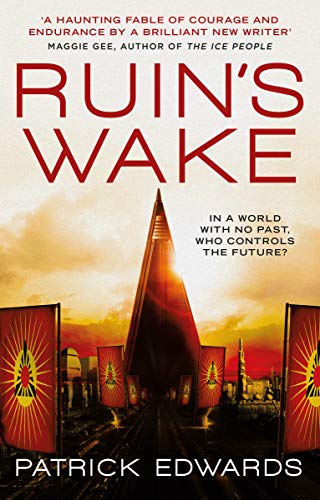 Ruin’s Wake presents a future dystopia of totalitarian rule loosely modeled on modern North Korea: the power of the state (and the associated military) is absolute, technology works only intermittently, and inconvenient knowledge is suppressed. Within this setting, Patrick Edwards presents three ultimately intersecting narratives. A young woman married to a military officer embarks on an illicit affair. A man who has long lived in isolation embarks on a mission to find his dying son. A scientist discovers long-hidden technology.

The book’s blurb reminds readers that in this setting, “individual identity has been replaced by the machinations of the state,” but the reminder is unnecessary. Ruin’s Wake presents its concepts in massive capital letters in case any passing reader should fail to notice them. And the characters are, indeed almost without identity. Unfortunately, that concept works counter to a book driven at least ostensibly by individual desires. It’s a situation that raises the potential for meta-fictional commentary on the intersections of identity and motivation, but Edwards’ writing never reaches that level of self-awareness or complexity.

Dystopia, especially post-apocalyptic dystopia, has grown from a niche concept to an entire realm of publishing. At this late stage, 26 years after The Giver and 11 years after The Hunger Games, any new addition to the genre should at minimum introduce a new narrative position or layer of cultural commentary. Edwards offers neither, instead presenting a novel whose dystopia gestures vaguely at a real-world scenario without deep understanding of it, and whose writing fails to explore any real kind of structural inequality.

Ruin’s Wake feels more like an early concept draft than a finished novel. The characters are only sketched in, and the world is barely half-built. The post-apocalyptic scenario is complete to the point that even the sun and moon have been renamed, and all human names have been replaced, but somehow homophobic insults persist. One is left considering the book largely in terms of other works that more fully realize what here is only attempted.

Lois Lowry’s The Giver uses language to represent cultural knowledge functions as a powerful commentary on how ideas are transmitted between individuals and preserved or eradicated within groups. Margaret Atwood’s The Handmaid’s Tale offers insight into the mindset and desires of a woman in a radically restricted position.

Even within this half-built world, Edwards has an enormous opportunity: to explore the ways that gender is constituted and how reproduction is tied to the continuity of the state. The state religion is headed by its apparently first-ever female Guide. What shifts might have led to this change? No clues are offered, and in this as few other moments, even the characters appear to be frustrated by the lack of deep world-building: “The first woman to hold the Seeker’s Keys in, well, ever, and you chose to be no different from all the swaggering cocks that came before you. You could have made things better, used the ambition that gained you their respect to make life more bearable for anyone not born rich or a man, but you chose yourself above everything.”

The Guide has no response. She appears as a character only in the last chapters of the book to monologue like a cackling villain and reveal how hundreds of pages of events have actually been the results of her long-sighted plans.

That Ruin’s Wake has been chosen for publication seems mostly a commentary on the hunger of publishers for dystopian narratives presented with limited, manageable vocabulary. Its design and jacket-copy may lure buyers, but few will be dogged enough to follow the book to its final, apparently almost random, sequences.