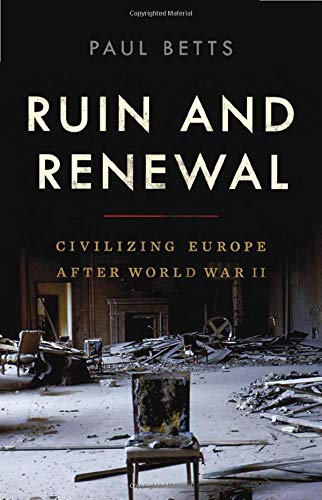 “Paul Betts’ Ruin and Renewal bills itself as interpretative post-World War II history, but it is instead another left-wing assault on Western civilization.”

Paul Betts’ Ruin and Renewal bills itself as interpretative post-World War II history, but it is instead another left-wing assault on Western civilization. In its pages, the promotion and defense of Western civilization is seen as little more than a justification for imperialism, racism, antifeminism, and neo-fascism.

Betts, who teaches European history at St. Anthony’s College, Oxford, is apparently one of the few remaining Cold War revisionists who still blames the United States and its European allies for starting the Cold War by intervening in the Greek Civil War and launching the Truman Doctrine. He accuses Winston Churchill of “brazenly” yoking communists and fascists as “twin threats to ‘Christian civilization’” in his Iron Curtain speech.

Stalin’s Soviet Union, according to Betts, was in a defensive posture after the war. Betts ridicules the notion that Eastern Europe was an “enslaved half-continent,” and that its citizens were “captive peoples.” Anglo-American anti-communism, he writes, was reinforced by the strident anti-communism of the Vatican and other Christian churches.

What this created, Betts explains, was “a new geography of Christian Europe.” The notion of Western civilization, he continues, “was predicated on the identification of Western Europe as the principal battleground of a new cultural war, with certain states to the east and south emerging as key flanks against the danger of communism.” West European and American political elites and the Catholic Church launched a “campaign” against “godless communism.”

Betts even argues against the Western concept of “human rights based on individual liberty,” instead favoring the broader socialist view that includes the “right to work, the right to education, and the right to health care” contained in the UN’s Universal Declaration of Human Rights.

The heroes of the postwar world, according to Betts, are the writers, scientists, philanthropists, and international social workers who promoted peace and understanding across the Cold War political divide. He lauds those who called for World Government and the international control of atomic weapons. He praises Soviet leader Nikita Khruschev’s outreach to the Third World. He credits Soviet leader Mikhail Gorbachev and, surprisingly, Pope John Paul II, for ending the Cold War. Apparently, Ronald Reagan had nothing to do with it.

The villains of Betts’ postwar world are the European neo-colonialists who attempted—sometimes brutally—to maintain their imperial rule, especially in Africa, and the United States that he accuses of aggression in Korea, illegality in Vietnam, and warmongering after 9/11. All of these misdeeds, he writes, were done in the name of defending Western civilization.

Absent from Betts’ interpretive history is any notion of geopolitics and the struggle for power among nation-states and empires that reappears throughout world history. Absent, too, is any discussion of the nature of the Soviet regime and communism in general. As the author of several books on 20th century Germany, Betts is familiar with the criminal nature of Nazism but is oddly silent about the criminal nature of all communist regimes.

The great evils of today’s world, Betts claims, are “right-wing nationalism, tribal populism, and anti-Muslim xenophobia.” The “new specter haunting Europe,” he writes (paraphrasing Marx and Engels in The Communist Manifesto), is a renewed commitment among conservatives to Western civilization which “risks undoing the decades-long work of peace-mongering organizations that put forward more universalist, postimperial ideals of shared world civilizations.”

The events of 9/11, Islamic terrorist acts in Europe, and the influx of refugees, Betts laments, “have reactivated the civilization-in-crisis theme in ways not seen since the early Cold War, providing ideological pretext for an emotional language of fear, insecurity, and collective identity.”

Perhaps most troubling of all is Betts’ apparent admiration for Chinese official voices that “talk about the coming of a sustainably managed ‘ecological civilization’ as a step toward a better future.” He even sees a silver lining in the COVID-19 outbreak because it “has prompted anxious international concern about a much deeper global crisis of civilization, and has brought with it a renewed one-world planetary consciousness about the mortality of humanity and civilization itself.”