The Royal Wulff Murders: A Novel 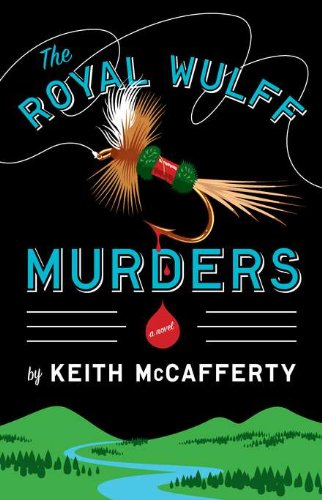 “The Royal Wulff Murders is long, the ending especially protracted and tiresome. There’s no need to wrap up everyone’s life; use your characters for a second book. Also next outing, focus on what keeps fly fishing a sport that’s worth rhapsodizing about.”

The Royal Wulff may sound like it’s an endangered species, but it is a type of lure used in fly-fishing. That’s a promising start; it encourages a reader to think they will be plunged into a world few know.

But stop me if you’ve heard (or read) this one. A beautiful dame wanders in to a detective’s office. She is a singer, but she really wants to. . . . Blah blah blah. It’s hard to get past the first few pages without sighing over such a formulaic tale.

Our detective is Sean Stranahan, a recently divorced easterner who paints and fishes while he decides what to do with his life. He was a qualified detective back home, but that was a long time ago, and now he is ill-equipped to help the dame. But that doesn’t stop him, despite numerous warning signs—after all how bad can it get?

There’s nothing intrinsically wrong with a main character trying out a new life, but the writer needs to make the reader feel some passion, some connection with the hero and a clichéd plot makes that all the harder.

The pace of the book meanders along, no doubt mirroring the tempo of the fly fisherman in the rivers and streams of Montana where it takes place.

There is an interesting plotline about “whirling disease” a problem posed by invasive species to trout streams. Once diseased fish get in hatcheries, they infect lots of trout, and it’s so long to the fish. No fish, no fisherman, no tourists, no money.

It’s an old dilemma: natives need money, but hate the outsiders who have it, even when they spend it to make the natives lives possible. The natural tension of a beautiful place being “discovered” and the newcomers wanting “improvements” is a good theme. Battles between Montanans and the Hollywood folk that have descended upon their state are good veins to mine.

Mr. McCafferty has some enjoyable passages expounding on the struggles of the two sides to coexist. If he spent more time with this, perhaps the reader could overlook the rookie missteps.

The Royal Wulff Murders is long, the ending especially protracted and tiresome. There’s no need to wrap up everyone’s life; use your characters for a second book. Also next outing, focus on what keeps fly fishing a sport that’s worth rhapsodizing about.