Rough Justice: The Rise and Fall of Eliot Spitzer 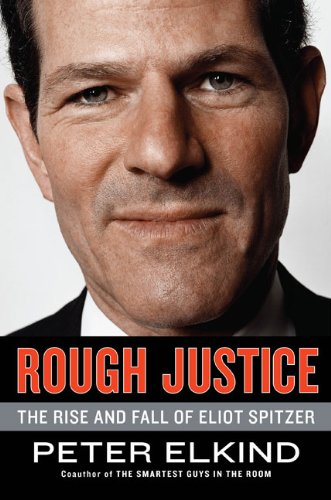 “[Elliot was] a muscular populist liberal who wasn’t afraid to confront business institutions by punching them in the nose. The MO was to keep things under wraps, announce them in a big way, then work with the press. You lay out all the appalling facts, and they’re dead, because they’re in the market. . . . When he really had the facts on somebody, it was like something out of Wild Kingdom.”

This is the story of the brisk rise and brutal fall of the Sheriff of Wall Street, the man who might have been the first Jewish President of the United States. It is also a true morality play and what Spitzer himself called a Greek Tragedy. In the end, it is a story about human strengths and weaknesses.

Elkind’s account (he was the co-author of The Smartest Guys in the Room) starts off promisingly, but he attempts to set up an odd comparison between Spitzer and John Kennedy. It seems that Elliot grew up under a demanding wealthy father who made his sons discuss major issues around the dinner table. The elder Spitzer is made to sound like the second coming of Joe Kennedy. But there are no signs that Spitzer was an intellectual like JFK (Spitzer made the law review at Harvard based on a writing competition rather than on his grades). If Elkind had called it correctly—and he never does in this account—he would have seen that Spitzer was the 2.0 version of Robert Kennedy.

RFK was the original liberal populist sheriff out to smash organized crime and tough in a manner that remains unusual for Democrat politicians. RFK was always convinced of the moral rightness of his causes, something that appeared to be true also for Spitzer: “We did not investigate Wall Street because we were troubled by large institutions making a lot of money. We took action to stop a blatant fraud that was ripping off small investors.”

But one cannot write a quasi-biography of a subject’s life without giving the reader a sense of the subject’s flesh and blood. Except for Spitzer’s sexual proclivities, Elkind does not deliver here in presenting a portrait of Spitzer the man—for better and worse. Instead, we have a newspaper-reporter-style account of Spitzer’s youth, education, unlikely political rise, and early exit from the world of politics. It is a shame and a major missed opportunity, as Elkind was perhaps the first person to get Spitzer to sit down for an interview after his short period of enforced exile. But Spitzer made it clear that he is not a contemplative person and saw little use in attempting to explain his actions to the author.

At the conclusion of Rough Justice, the reader is left with the same question posed by Lloyd Constantine, an aide and friend who had been with Spitzer from the start of his professional life, “I kept on feeling: what is wrong with this guy? Who is he?” Asked but not answered.