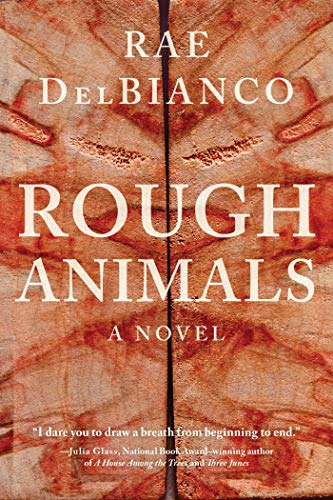 “bleak, despairing, and an utterly compelling examination of freewill versus fate.”

Intent on finding his small herd of cattle, Wyatt Smith cradles his shotgun and leaves home before dawn. An hour later, on the remote northern Utah ranch his forefathers settled generations ago, he finds the herd. One of the steers is dead, a bullet to its head and someone feeding off it. The someone shoots at Wyatt, ripping off a chunk of his arm, and he eventually corners the fleeing figure. It is a teenage girl, wild and dripping with his steer’s blood. All in the first two pages. It gets bloodier and more brutish as DelBianco’s aptly named debut novel continues.

In the shootout following Wyatt’s discovery of the girl, three more cattle are killed. The four lost animals are the difference between Wyatt being able to pay the mortgage or losing the ranch. Determined to extract restitution from the girl, he drags her home where he and his twin sister tie the girl to a chair and lock her in a bedroom. But a girl capable of killing a steer and eating from it is no ordinary girl; soon she frees herself and bolts.

Calling the police is impossible; five years before an 18-year-old sister Lucy killed their father in a hunting accident. Rather than report it, Wyatt and Lucy had buried “the father,” as they refer to him, out in the woods and pretend on rare visits to town that he is still alive.

Forced to make the girl pay or lose their ancestral home, Wyatt sees no choice other than to go after her. What ensues is blood bath after blood bath as Wyatt follows the girl (who remains nameless) into the desert and into a violent vendetta between drug cartels.

As the gore and violence escalate, it’s hard to feel sympathy for any of the characters, yet somehow DelBianco makes their fate seem more like a rotten high-stakes poker hand than a series of desperately poor choices. The harsh desert landscape is its own character, as violently unsparing as its denizens and an equally hapless casualty of destiny.

There are a few glaring holes in the novel (no one in town has missed the father for five years? The police aren’t following the mounting trail of bodies, and are clueless about a massive, drug-manufacturing greenhouse in the middle of a desiccated landscape?), but the breakneck action leaves little time for the reader to dwell on inconsistencies. DelBianco lets her audience catch their breath between florid descriptions of the Utah landscape and incongruously contemplative discussions among the characters.

Between flashbacks of the father, brother, and sister killing for subsistence, and Wyatt and the girl running for their lives through a merciless desert, DelBianco’s characters wax philosophic upon violence, power, and leaving one’s mark upon the world. Folded into DelBianco’s taut thriller is a treatise on the necessity of killing for survival, suggesting that at our core a human is a “rough animal” indeed.

DelBianco’s is not the smoothest writing, especially during lulls in the action when it feels she is trying too hard, but she tells a gripping enough story to make the occasional literary trips worth stumbling over. Rough Animals, DelBianco’s debut novel, is bleak, despairing, and an utterly compelling examination of freewill versus fate.

Baxter Clare Trautman writes the Lambda nominated LA Franco mystery series. Her most recent novel was Hold of the Bone, a finalist for the 2015 Foreword Book Award for LGBT Fiction