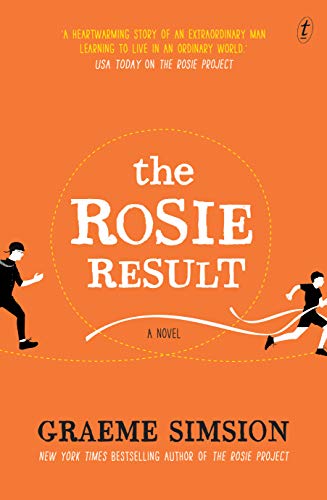 This book, final volume of a trilogy, has been hailed as “hilarious” and “comedic” and similar terms. Whether you find it amusing depends on where you sit on the continuum between “neurotypical” (i.e., normal) and “autistic” (the main subject of the series, especially highlighted in this volume).

A more accurate descriptor of the novel would be “light-hearted.” Author Simsion hits just the right balance between serious literary exploration of social issues and the delightfully humorous (mis)adventures of an unusual but good-intentioned modern family.

The protagonist, Don Tillman, was introduced in The Rosie Project (2013), when he set about finding a wife to counterbalance his super-rational, introverted, socially inept nature. He was soon revealed to be an Asperger syndrome personality. In the years between volume 1 and volume 3, the Asperger’s label has been subsumed under the “autism spectrum” label, according to the authorities who define such things.

In volume 3, Don and Rosie are faced with the prospect that their 11-year-old son, Hudson, might also be autistic. As they fumble their way through reconciling his behavior with that label, readers learn a great deal about what autism actually is.

More important—and this is what gives the book a literary quality despite its ebullient tone—we learn much about the prejudices inherent in our society. This is old news in terms of race, religion, and sexuality. The Rosie Result pits these as well as psychological otherness against today’s “political correctness,” “identity politics,” “the outrage industry,” and “professional offense-takers,” all of which make a big noise about diversity and equality without universally walking the talk.

And therein lies the book’s humor. It pokes fun at, and pokes holes in, the driving human need for acceptance, to fit in with the herd. Almost every episode in the novel involves Don, Rosie, and/or Hudson struggling to conform with conventional expectations while being constitutionally unable to do so.

Their struggles, their inspired projects—be they at work, home, school, or in their social lives—might be well reasoned but usually result in unexpected and absurd opposite-from-desired outcomes. The happy factor of the book is that they ultimately succeed. The sad factor of the book is they have to spend so much time and energy trying.

Along the way, however, we enjoy their company. The Rosie Result, like its predecessors, is interesting and fun, and gives everyone on the normal-to-autistic spectrum something to relate to. That spectrum is ultimately what the book is about.

Through good writing and storytelling, which shows rather than tells, letting us see through the characters’ eyes and think with their heads and feel with their hearts, we recognize there are no absolutes, and we all occupy some point or other on the grand human spectrum.

Thus it’s worth reading all three volumes, although The Rosie Result independently wraps them up and can stand on its own. By the time you’re done, you not only might be comforted about your own (ab)normalcy, but also feel warmer and more understanding toward other people’s weirdness—and gain the ability to laugh about it instead of condemn.

That’s the signature of good fiction!