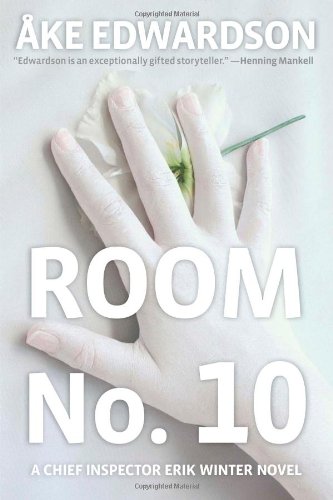 “Room No. 10 is an unusual and engaging experience.”

Room No. 10 is a thought provoking book in the sense that the reader has to decide what to make of it.

Is it good or bad?

Well-written or over written?

Room No. 10 begins with a fascinating death and premise: a woman hanged with a hand painted white. It’s unclear if she has been murdered or has committed suicide.

To the average reader, it would likely seem a common enough suicide note. But the clues that follow are fascinating enough to forgive this.

The clues are gone over again and again in increasing detail and with more and more in-depth conjecture as to their meaning. This may sound tedious, but it is an unusual and remarkable technique, and Mr. Edwardson uses it masterfully to drive the first act of the novel.

The second act delves deeply into Winter’s psyche. Nordic crime novels are well known—to the point of chiché—for disillusioned protagonist criminologists, but Room No. 10 takes this well beyond the clichéd norm.

Winter questions the value of his life, relationship, and career, then proceeds to question his questioning of it, again and again, from different perspectives—deconstructing every aspect of his existence. He seems clinically depressed. A typical indication:

“Once in a while the truth had been spoken. Had sprung forth like a light in the darkness. A floodlight. After that, everyone had been able to go home, to their cells, to their apartments, to houses in the suburbs. To their graves, he thought suddenly.”

The novel is weighted heavily toward description of nearly every aspect from the setting, Gothenburg, to exposition concerning anything and everything. Pages are dedicated to a discussion of pancakes and syrup, and as mentioned, every facet of Winter’s inner world and his ambivalence toward nearly everything.

And for the reader with patience, the technique works—and makes for a very human story.

The dialogue is pithy and realistic. The investigative crime team sometimes teases and bullies, at other times showing empathy toward one another, as alpha males and longtime colleagues are wont to do.

The final act brings us back to revelation and action, and as a good final act should do, barrels like a speeding train toward the climax. The climax itself works and satisfies, reminding one of a well-known book by the writer Stieg Larsson. But here's the rub: Larsson’s first book was published a year and a half after Mr. Edwardson’s. Food for thought.

Final analysis: Room No. 10 is flawed, but despite clichés and some tangents, is built on a unique foundation and written by an author with an authoritative, well-developed voice.

Fans of Nordic crime should give this inventive author a read. Room No. 10 is an unusual and engaging experience.

James Thompson is an established author in Finland. His novel Snow Angels, the first in the Inspector Vaara series, was released in the U.S. by Putnam, marking his entrance into the international crime fiction scene. Booklist named it one of the 10 best debut crime novels of 2010, and it was nominated for the Edgar, Anthony, and Strand Critics awards. His second Vaara novel, Lucifer’s Tears earned starred reviews from all quarters and was named one the best novels of the year by Kirkus. The third in the series, Helsinki White, was released to critical acclaim. The fourth, Helsinki Blood, releases in March 2013.