A Room Away From the Wolves 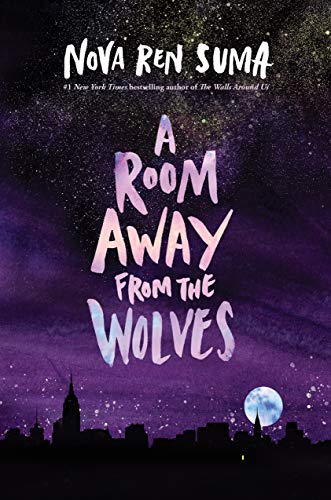 Sabina “Bina” Tremper is a 17-year-old girl in trouble. She’s also a very troubled girl, self-sabotaging every relationship and engaging in reckless, thoughtless acts. When her mother asks Bina to leave home for a cooling off period, Bina instead crashes her stepsisters’ party in the woods, only to have them and their friends turn on her with feral ferocity. After a vicious attack—both physical and emotional—Bina takes off for the safe haven of Catherine House, a women-only “refuge” in New York City that once upon a time provided shelter for Bina’s mother when she left the violent man who was Bina’s biological father.

Nova Ren Suma’s lyrical voice transports us along with Bina into a Manhattan that is at once familiar with its urban grit and rhythms and yet also otherworldly strange—as if, as outsiders, we along with Bina cannot hope to pierce the city’s opaque, mystical veil. Compared to Bina’s rural upbringing, life among the steel towers and concrete streets feels exotic, at once compelling while also unsettling to the point where she doubts her senses and reality.

Even finding Catherine House proves to be a challenge until a chance encounter with a fellow resident steers Bina in the right direction. Monet, a mysterious and alluring girl with an ever-shifting personality and appearance also gives Bina a piece of advice: Hold your cards close.

Bina follows her advice, concealing her confusion as she meets the elderly caretaker of Catherine House and her fellow lodgers, all of whom expect Bina to know more than she does about her mother’s stay and the sanctuary’s founder, Catherine de Barra, who died under mysterious circumstances over a century ago and is said to haunt the house—or perhaps, more accurately, haunt the girls who come there seeking refuge.

Suma creates an atmosphere reminiscent of Gothic classics, combining the tropes of a naïve young woman searching for her own truth even as she strives to solve the mysteries of her new home. We, along with Bina, are transported into a world that is both confusing yet familiar, a refuge from the mundane realities—and pain—of the world beyond its gates.

As Bina explores this new world, learning more about herself, her fellow lodgers, her mother, and the mysterious Monet, she finds herself torn between the desire to remain in this mystical limbo of a safe haven and a need to escape back to her life, even if that would forever open Catherine House’s gates to the rest of the world and the wolves waiting to pounce.

With lush, evocative prose, Suma captivates and intrigues, creating a frisson-inducing tale where we wonder, yet never doubt; we believe even as we question. By the end, we have all the answers—and yet nothing is concrete, every passage ambiguous and open to interpretation. It’s up to us to decide if the ending is one of happiness or sorrow—Bina herself is uncertain, yet hopeful. Which is perhaps the best way to end a ghost story: with a possible new beginning.

Recommended for ages 14 and up and fans of David Mitchell’s Slade House.