The Romantic Economist: A Story of Love and Market Forces 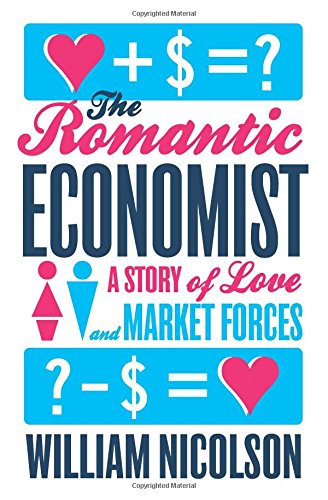 “. . . in this lighthearted tale of love and market forces, Mr. Nicolson recounts how he used economics and game theory to attract women and then to form a partnership with one of them. . . . For a reader who is not versed in basic economics, this story is a good set of illustrative examples.”

If an economist whom I was dating ever tried to use game theory to manipulate our relationship, the outcome would be a sub-Pareto optimal Nash equilibrium. I would dump her.

When, as an undergraduate studying politics and economics at university in the UK, a woman dumped author William Nicolson (“it’s not you, it’s me”) he turned to his economics concentration to improve his chances of attracting women and forming a stable relationship.

Although he seemed to have more IQ than emotional intelligence, young William was clever enough not to tell women about his application of economic theory.  Or at least he didn’t tell them after the first one or two disasters. And in this lighthearted tale of love and market forces, Nicolson recounts how he used economics and game theory to attract women and then to form a partnership with one of them.

Supply and demand, and the efficient market hypothesis informed his strategies for hitting on attractive women in clubs, how he got their attention, and how he went about asking for a more formal date. Theories on signaling preferences under uncertainty helped him to communicate his interest in a way that did not make him seem too desperate, and that maintained a balance between self-deprecatory humor and arrogance. Bargaining theory led him to pretend that he was too busy to see a woman he liked, so that she began to open up her calendar for him.

Investment theses and the concept of sunk costs assisted his decision whether to be exclusive in the relationship, and how long to stay in it. And, of course, the strategy of conflict gave him credible and viable threats for conducting the relationship (author Nicolson may want to return to Thomas Schelling’s seminal book on nuclear deterrence for a better understanding of fractional threats).

For a reader who is not versed in basic economics, this story is a good set of illustrative examples. For those with a more advanced understanding, the book might serve to provoke thoughts on what is wrong with the economics profession (though that is clearly not the author’s intent).

By definition, The Romantic Economist objectifies women by treating them as commodities to be considered as bartered goods; and Nicolson is careful to apologize in advance for causing offense in his humbly told tale. But the objectification of women is not his doing: It is the problem with economics.

Karl Marx told us long ago that a flaw of capitalism is that in treating labor as a commodity, workers are alienated from the fruits of their labor.  Economics turns what we value into objects.  It removes the passion from essential human interactions. And in doing that, it fails to encompass a most important part of how we exchange what we value, and how we deal with one another in daily life.

Economics is supposed to be a description of our relationships, but when they involve a range of emotions, we are suddenly outside the scope of the discipline.  It is objectionable, on the face of it, to apply the dictates of Strategy and Conflict to people for whom we have affection  But our anticipation of a partner’s reaction is both the basis for game theory and also a part of emotional intelligence. EQ should be an integral part of the assumptions that form game theory.

In describing how two varying sets of emotions coincide in a partnership, Mr. Nicolson claims to be applying the precepts of economics. Any graphical depiction of concepts—a two-by-two matrix, or a graph with an equilibrium point—is not economics. Instead it is a technique used in all social sciences, or it may be simply rigorous thinking.

Economics has become imperialistic. It claims to explain everything, in part by claiming as its domain all of the objects of study it so blithely ignores: the psyche, culture, politics, and society.

Economics would be a much richer field of study if it truly and usefully could be applied to romantic relationships. But problems with economics are not Nicolson’s shortcoming. It’s not him. It’s economics.