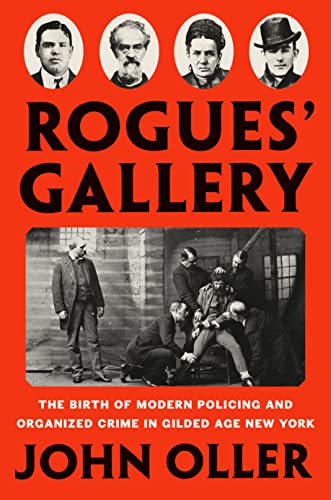 “A fascinating page-turner, Rogues’ Gallery will appeal to true crime buffs and anyone interested in the dark side of life in late 19th century New York City.”

Byrnes was a tough cop suited to New York’s Gilded Age (1870s to early 1900s)—“a man who would buy you or beat you, as you might choose, but get you he would,” said muckraking journalist Lincoln Steffens.

Crime was rampant, with criminals growing far more professional and police struggling to keep up.

Oller’s lively, well-researched account brims with colorful characters. They include criminals like George Leslie, the high-society mastermind behind major bank robberies, who planned with care, studying locks and tinkering with improvements in burglary tools. He would become a “premiere criminal” of the 19th century.

Fence for the era’s major burglars was a charming, Jabba the Hutt-like figure known as “Mother,” who held court on the Lower East Side. A 250-pound, mannish-looking Jewish immigrant, her real name was Fredericka Mandelbaum. She was “the nucleus and centre of the whole organization of crime in New-York,” said The New York Times.

The author, a retired Wall Street attorney, delights in telling stories about Mother, who made deals with counter clerks at Lord & Taylor and other fine stores. If clerks agreed to look the other way when Mother’s minions came in to shoplift, they would share in the profits.

In that “golden age of bank robbery,” Thomas Byrnes began to earn a national reputation as “the best-known police detective in America,” writes Oller. After the great Manhattan Savings Institution robbery of 1878, when the bank refused to negotiate at Byrnes’ urging, his fame soared.

Muckraker Jacob Riis said Byrnes could be “unscrupulous,” as when he arrested all known pickpockets and jailed them before large public gatherings, such as the 1885 funeral of Ulysses S. Grant—a clear violation of due process. “To Byrnes, the ends justified the means, and habitual criminals had no rights a policeman was bound to respect,” writes the author.

Even so, the Irishman “made the detective service great,” said Riis. Soon, New York’s detective bureau rivaled Scotland Yard’s, with Byrnes becoming chief inspector (the number two post) in the department in 1888. In the same year, he was celebrated as the city’s greatest detective in popular dime mystery novels written by Julian Hawthorne, son of Nathaniel Hawthorne. This was just about the time when readers discovered Sherlock Holmes.

Oller goes on to chronicle the rise of the Whyos gang, which became “the wickedest criminals” of the 1880s, devoting full-time to counterfeiting, pickpocketing, and other crimes. They were “transitional figures between the ragtag street brawlers of earlier times and the more business-oriented racketeers of the Prohibition era and later twentieth century,” he writes.

By 1895, former Rough Rider Teddy Roosevelt was New York’s reform-bent police commissioner, introducing the police bicycle squad and other innovations along the way. Oller traces the growth of Jewish and Italian gangs in the period, and the creation of the police department’s 40-detective Italian Squad, led by short, heavyset detective Joe Petrosino, himself an immigrant, and nemesis of Black Hand extortionists who terrorized better-off Italians.

Petrosino was a master of clever disguises who often embedded himself as a laborer or organ grinder in Italian American communities, determined to obtain needed information. The author notes that whenever a major crime involved Italians, the call would go out: “Send for the dago!” Early in his career, Petrosino was “virtually the only Italian on the police force and was disliked, insulted, or simply ignored by his Irish colleagues.”

As the Gilded Age waned, the deductive, pavement-pounding methods of detection pursued under Byrnes took second place to fingerprinting and other forensic analysis. It marked the beginning of modern policing.

A fascinating page-turner, Rogues’ Gallery will appeal to true crime buffs and anyone interested in the dark side of life in late 19th century New York City.