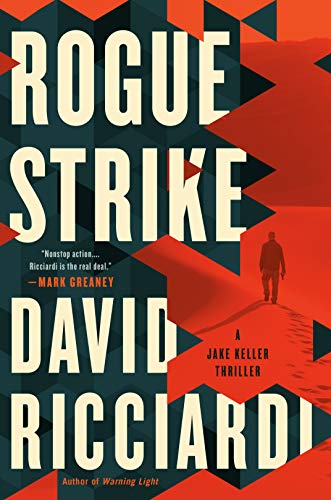 “Rogue Strike doesn’t let up for a moment. There’s no time to sit back and catch your breath, because each chapter explodes with action.”

CIA field officers Curt Roach and Jake Keller are about to conclude an operation in Yemen in which they’ve targeted a leader of the violent extremist group al-Qaeda for a drone strike. After setting up a laser guidance device, Roach and Keller wait in vain for the missiles to hit. Meanwhile, their target is about to leave the hot zone.

Barely escaping with his life when the mission goes sideways, Jake discovers that instead of launching its missiles at their target, one of the drones was diverted to Saudi Arabia where it carried out a devastating attack in Mecca that killed thousands of innocent pilgrims celebrating the Hajj.

Caught in the crosshairs of an international plot that could change the balance of power in the world, Jake must prove that he had nothing to do with the hijacking of the drone and that the United States has not committed a blatant act of war that could have apocalyptic consequences.

Rogue Strike is David Ricciardi’s second novel, following up on Warning Light (2018), his successful debut. His protagonist began life in the first novel as Zac Miller, a CIA strategic weapons analyst, and now that he’s entered the field he’s working under the name Jake Keller.

Ricciardi doesn’t seem to have any direct professional experience in espionage, CIA intelligence analysis, or other significant background connections that would make him a subject matter expert transitioning to the world of fiction, as is so often the case these days. We’ve all seen how publishers love to sign up someone with a resume that reeks of action, command, and insider information.

Instead, Ricciardi’s simply a very good storyteller, which more than qualifies him to author an international thriller worthy of our attention.

In fact, Rogue Strike doesn’t let up for a moment. There’s no time to sit back and catch your breath, because each chapter explodes with action. Your fingers take on a life of their own, turning the pages as fast as your eyes can read.

Even better, the action flows naturally out of his plot, rather than simply dropping gratuitously onto the page. As Jake crisscrosses the region searching for answers, he draws fire from all quarters. “Everyone he’d met in Yemen” the narrator remarks early on, “was trying to kill him.” Later, in Libya, a local advises him to “‘Assume that everyone you meet wishes to kill you.’”

Jake Keller is a good protagonist, and Ricciardi has done a good job extending him from the first novel into a character who dominates our interest in this follow-up offering. At the same time, Ricciardi has a real knack for action scenes, and Jake’s various encounters feel realistic and exciting.

The only drawback to the novel involves the author’s use of multiple points of view. A convention of spy and terrorism thrillers, switching point of view from our intrepid hero to various bad guys and back again is a time-honored tradition in the industry, encouraged by agents and editors alike. Uber-rep Donald Maass, for example, is known for his belief that multiple viewpoints deepen conflict, broaden scope, and add rich texture to a story.

Be that as it may, frequent shifts in point of view make Rogue Strike choppy and a little frustrating at times. Just as Jake finds himself plunged into yet another firefight, the action abruptly shifts away to General Wǔ Ding Yǒng of the Chinese Central Military Commission or his co-conspirator Deputy Crown Prince Faisal bin Farah-Aziz al Saud, second in line to the Saudi throne, or to the President of the United States, or to miscellaneous terrorists carrying out attacks on America.

Given the shortness of the chapters—another popular feature of current genre fiction—the reader quickly ends up with a case of thrillus interruptus as Jake suddenly disappears into the rear-view mirror. By the time he returns to the foreground, it takes a paragraph or two to remember what was happening several chapters earlier.

While the use of multiple points of view can occasionally be well managed by a skillful, experienced author, perhaps the time has come for the industry to stop pushing it as a de rigueur narrative technique.

Yes, it has classical roots in Conrad and Faulkner, and yes, it can indeed broaden the scope of a novel and add suspense. But it also interrupts flow, interferes with focus, and is often unrealistic. Is this really how Chinese generals and Saudi crown princes and fanatical terrorists speak and think? Can we trust you on this? Are you sure?

Despite the somewhat irritating narrative shuttling, Rogue Strike is an excellent thriller that’s fun to read and tells an entertaining story. Put it right up at the top of your list of beach reading for this summer, and you won’t be sorry you spent your money on it.