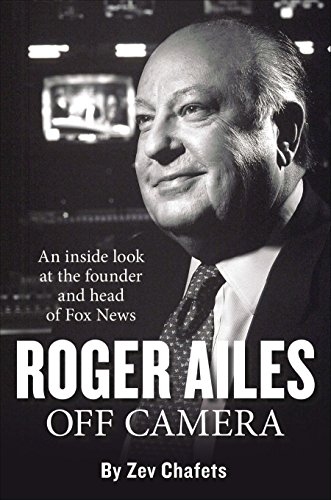 “Understanding the man behind Fox News, how his juggernaut was assembled, and how it is captained shines a new light on news reporting—whether one leans port or starboard.”

In short, Roger Ailes is the man behind Fox News, the man who walked up to media magnet and fellow conservative Rupert Murdoch and said “give me money and I will start a cable news organization for you.” Murdoch said “Yes.”

Where did he come from and how did he gain so much understanding of cable television when the medium was brand new? How did he and his network become the darling of the American conservative and tea party movements? Biographer Zev Chafets provides the reader a small glimpse in the preface.

In 2011, [Ailes] won the Horatio Alger Award in recognition of his personal and professional success despite humble and challenging beginnings, and said, “People who believe they can win will eventually win.”

Author Chafets takes the reader though the life of his charge not as much from research but by shadowing his target, something of which biographers of long dead leaders can only dream. This gives Mr. Chafets a unique perspective of the man and the machine of Fox News. It also causes some problems with familiarity and its own bias.

Though we are guided through a short history of the subject’s life pre-media–moguldom, the reader is not made truly privy to an expanded background of Ailes, his history, or his family. There is some information about his parents and siblings, but not to the standards set by biographers David McCullough, T. J. Stiles, or Ron Chernow. It is enough to gain a peek, but not enough to fully understand the man behind the curtains.

Ailes was raised in the hamlet of Warren, Ohio, today a suburb of Cleveland with a population of just over 41,000; the middle child in a poor working class family. He remained close to his conservative roots established by, in Mr. Chafets’ words, “[the]Paranoia and pride [that] coexisted in Warren, Ohio . . .” during the Cold War. This does not fully explain why Ailes did not rethink the fear factor as did many of his small town Ohio contemporaries.

The reader is eventually led to a major clue to Ailes’s management style; his father and his first media boss were hard core, relentless, demanding, abrasive and, in his father’s case, abusive. This would eventually create Ailes’s own “my way or the highway” business style.

We do learn that Ailes was a television entertainment and news producer long before Fox’s birth, including the fledgling The Mike Douglas Show and later Tomorrow with Tom Snyder. He worked his way through Nixon and G. H. W. Bush politics as a campaign media advisor and the master of “the spin,” only to his return to television (and stage) production in the 1990s.

Ailes’s relationship with Rush Limbaugh also provides a small window into his political and news reporting persona. Mr. Chafets reports that Limbaugh received some advice from his friend Ailes.

“Rush, [the audience doesn’t] care what you think. Don’t try to persuade them of anything. Don’t try to change their mind. They are not asking you questions to learn anything. So don’t look at this opportunity to enlighten them. Whatever they ask, just say whatever you want to say.”

Roger Ailes is really more about the history of Fox cable news and how Ailes directs the traffic after Murdoch gave him the money, the okay, and autonomous control. It is about his understanding of the world of cable news and entertainment, his competitive attitude, and his management style.

Ailes understood from the beginning that CNN, MSNBC and other fledgling cable news outlets were missing a key element to the 24/7 news cycle: entertainment. Mr. Chafets lauds the efforts of Ailes, his insights, and his ability to combine the news and entertainment while pirating high name-recognition personalities who would play by Ailes’s rulebook and new and untested personalities who can be indoctrinated to the Ailes system.

Beneath it all is the discussion of Fox News’ “Fair and Balanced” moniker and how Ailes attempts to maintain that split between entertainment and news, though in some instances the two arms do cross. Ailes makes no bones about his dislike of “main stream media” (read “liberal”) that he believes is “bullshitting” their audience concerning media bias.

The conservative reporting by Fox News is praised not because of the politics, but for the open bias of the news network. Quoting television news producer Rick Kaplan, we are told that if the broadcast (liberal) news is reporting on “young girls and how hard it is for them to find an abortion provider,” Fox will “focus on adoption and how young girls can arrange for one.” This, according to Kaplan, is the “conservative view point.”

My own political standards are reflected in this essay. It is hard not to include them when writing about the leader of Fox News regardless of one’s political vision. It is hard to put aside the feelings that Mr. Chafets is paraphrasing Shakespeare’s Anthony in Act 3, scene 2 of Julius Caesar, proclaiming, “Friends, conservatives, liberals, countrymen, lend me your ears. I come to praise Roger Ailes, not to bury him.”

It begins in the preface where Mr. Chafets states, “If a Machiavelli society gave an award, it would be on Ailes’s mantel next to the Horatio.” But one gets the feeling that is not a testament to Ailes’s use of deception or deceit, but as praise for his outstanding work, and like Machiavelli’s The Prince for his own themes of perseverance, glory, and survival in the harsh worlds of media and politics.

This does not mean an overall panning of the book. On the contrary, it is a must read for those who do and do not praise Fox News, Roger Ailes, and Rupert Murdoch. Understanding the man behind Fox News, how his juggernaut was assembled, and how it is captained shines a new light on news reporting—whether one leans port or starboard.