Rocket and Lightship: Essays on Literature and Ideas 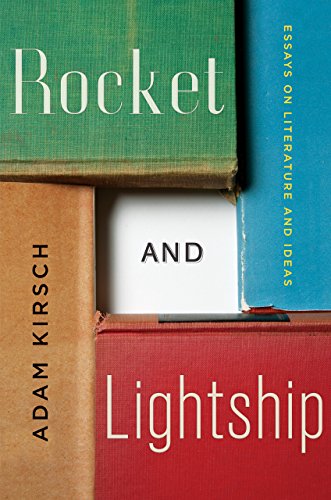 If you are an appreciative reader of Adam Kirschs’ articles and reviews in The New Yorker, The New York Review of Books, The Times Literary Supplement, and elsewhere you will approach Rocket and Lightship with pleasurable anticipation, an emotion which will prove only partially justified.

The problem lies not with Mr. Kirsch’s incisive analysis and the elegance of his prose, both of which are still in evidence, but relates to the difficulties of convincingly translating a number of topical ephemera, very much harnessed to a particular time and context, into chapters of a book.

Although acknowledgement is made on page 305 that all of these essays have appeared “usually in a somewhat different form” in the publications listed neither there nor in the individual chapters is any precise reference given for the first emergence of the ideas and review in question.

Presumably this was a conscious decision by the author and publisher to make the ideas and opinions appear less time-bound, but it has had the reverse effect. This arrangement can often prompt the question “So why is he talking about this now? What does this concern relate to?” This is particularly the case for chapters on rather abstract themes such as “Art and Biology” or bringing together a number of literary works to compare and contrast.

The other question that arises relates to Kirsch’s presence as a “public intellectual;” is his profile as a critic sufficiently strong and well-defined to make these chapters hang together as some sort of coherent whole? Does he have the kind of stature to make whatever he has to say of interest? Is he as some commentators have suggested an “Edmund Wilson or Lionel Trilling”? On the evidence of this collection the verdict would have to be “Not yet.”

While he has a number of themes that recur—Central European Culture, Jewishness and Anti-semitism, the meaning of culture and aesthetics, the role of the writer, and of criticism itsel—his critical profile is not sufficiently well-defined to make this a truly convincing ride.

Often his views though undated seem dated. His views on the role of the writer for example as a “representative person”—“What matters is not that the writer has a right but that he is right”—sound odd and elitist in an era when everyone is a blogger. Similarly, his views on the function of art in society call out for some real-life examples to make their point; even the British Museum’s perennial global chess game with the Elgin marbles would suffice.

Carping aside, both these concerns—of translating ephemera into something more permanent, and of Mr.Kirsch’s own “weight”—pose more of a problem for the critic who needs to review the entire book than for an interested reader who is just dipping in and out.

Every reader will have their favorites from the wide range of philosophy and literature critiqued. His exposure of the “deadly jester” Slavoj Zizek’s modus operandi was acute and original; as was his examination of the evolution of Zadie Smith’s thinking and writing “What is troubling is that Smith seems to be denigrating exactly the qualities that made her first three books not just popular but good.”

His discussion of Jewishness was most elegant and coherent in the chapter on Proust—“Proust Between Halacha and Aggadah”—where he writes “the question of Proust’s Jewishness, and the Jewishness in Proust, still has the power to excite strong feelings among Jews today, since it touches on the very questions of belonging and identity, culture and heritage, that continue to define Jewish life.”

His long chapter “Darwin at 150” contains many astute observations on what we can and should expect from Darwinism and reminds us that the great man himself had rather modest expectations of the potential influence—in particular political influence of his work—“I think I shall avoid the whole subject” of mankind which was  “too surrounded with prejudices.”

Kirsch’s views on the work and thinking of Hannah Arendt, Francis Fukoyama , Michel Houellebecq, Ian McEwan, W. G. Sebald, Susan Sontag, and a number of other perhaps less well-known names are all given thoughtful treatment in other chapters.

The title of the book Rocket and Lightship comes from a poem by Gerard Manley Hopkins, “The Wreck of the Deutschland,” which describes the grounding of the S.S. Deutschland on the Kentish Knock at the mouth of the Thames in 1875. Help was slow in coming because of the heavy weather and despite the ships’ rockets and flares 168 passengers drowned including five Franciscan nuns emigrating to the US to escape religious persecution in Germany. The nuns called out to God and prayed as the ship went down.

The last chapter—first published in Poetry and that takes “Rocket and Lightship” as its title—is a collection of aphorisms, apercus, and longer statements of belief at least one of which appeared in earlier chapters, and some of which appear to contradict earlier conclusions.

Here we learn for example that “Writers are innately unrepresentative, precisely because they see life through and for writing.” As this is such a key element of the Kirsch’s credo the inconsistency should have been picked up.

Presumably, though it is not explicit, this chapter and the book overall are intended to be seen as a distress cry for the decline of culture and seriousness, the role of the writer and of criticism, with which Kirsch is so profoundly concerned.