Rock Me on the Water: 1974—The Year Los Angeles Transformed Movies, Music, Television, and Politics 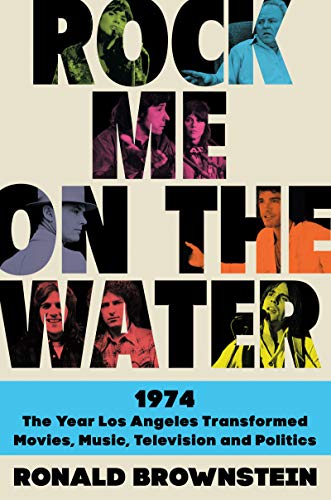 “a welcome blast from the past for many readers.”

Journalist Ronald Brownstein presents a sweeping account of how the 1960s counterculture transformed American cultural life. It happened in Los Angeles, in 1974, he writes in Rock Me on the Water, when the ’60s critique of the contemporary U.S. sparked “an outpouring of artistic creativity [that] offered an alternative to the martial and material consensus of Nixon’s America.”

In that year, the era’s extraordinary social changes were first reflected in the entertainment industries. From the movies Chinatown and Shampoo, to television shows like All in the Family and M*A*S*H, to the songs of Linda Ronstadt and Jackson Browne, the newfound openness and freedom of socially engaged Baby Boomers supplanted the safe, tradition-bound thinking of an aging entertainment establishment, which soon became culturally irrelevant.

Baby Boomers now had rising buying power, and Hollywood and the other entertainment factories shifted gears for a “fragile and fleeting” moment to meet their cultural preferences.

Brimming with nicely woven stories, gossip, and insights, Brownstein’s book recounts month-by-month the cultural upheavals of the year. We see a “wave of generational transition” washing over Los Angeles, as singers and musicians turned the city into a “Republic of Rock and Roll,” with the Eagles and others becoming royalty on the social scene. Technical changes, the rise of FM Radio, and other factors turned the music industry into an economic force.

In the worlds of TV and films, inroads by the younger generation faced great opposition. Both industries were led by older white men “who might interact with young people only when they propositioned a starlet.” Even so, the enormous success of TV’s Maude and The Mary Tyler Moore Show, with their controversial comedy on social and women’s issues, brought into America’s living rooms the great social changes of the ’60s, notably ”suspicion of centralized authority, loosening sexual mores, a reconsideration of gender roles, more concern for the environment, greater tolerance of alternative lifestyles.”

Brownstein takes readers to rock festivals, clubs, studios, TV sets, and other settings where these changes were manifest. Through the stories of Tom Hayden and Jane Fonda, “First Couple” of the far left, he shows the difficulties facing activists when trying to mainstream ’60s ideals and social changes into the lives of a mass mid-American audience.

Some of the author’s stories will be familiar to many readers. But he has interviewed artists like Linda Ronstadt, Warren Beatty, and others in depth, and explores the backstories of songs, TV shows, and movies in ways that recreate the energy and excitement of the era.

“The greatest works of Joni Mitchell, [James] Taylor, and [Carole] King show artists examining relationships as intently as the best filmmakers of the time were beginning to explore corruption and the abuse of power, and all toward the same end: constructing an alternative vision of how a new generation of Americans might live their lives.”

In traditional politics, Jerry Brown, the former Jesuit seminarian who became California governor, exuded the “antiauthority impulses flowing through the popular culture,” offering much the same critique of American society as films like Shampoo and Chinatown.

By year’s end, the L.A. renaissance had descended into decadence, says the author. Drugs flowed much too freely, and the once-fabulous glitter of it all faded with the demise of the Eagles and the collapsing ratings of All in the Family.  It’s perhaps a too-neat ending (were drugs not flowing fairly freely throughout the year?), but readers may cut Brownstein some leeway for his literary license.

A senior editor at The Atlantic and veteran writer for the Los Angeles Times, the author has crafted an unusually readable story of how Los Angeles once ruled popular culture. His book will conjure a welcome blast from the past for many readers. For others, it will be a bright introduction to the year when flower power burst into the wider American cultural life.