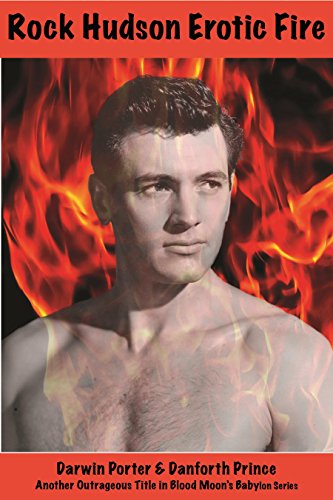 Although the reader has more than once felt as if a given Hollywood biography produced by Blood Moon Productions ought to have opened with the familiar phrase “Once Upon a Time,” he nonetheless has, over the years, developed a fondness for the folks of Blood Moon and for the books that they publish.

So have the folks at the Huffington Post, apparently. When writing about Blood Moon biographies, they say this:

“Blood Moon, in case you don’t know, is a small publishing house on Staten Island that cranks out Hollywood gossip books, about two or three a year, usually of the five-, six-, or 700-page length, chocked with stories and pictures about people who used to consume the imaginations of the American public, back when we actually had a public imagination.”

Or to be more succinct about it, as Blood Moon Productions says about itself: “Award-Winning Entertainment About How America Interprets Its Celebrities.”

That word “interprets” is all-important. In the world of the Blood Moon Hollywood biography, time shifts about strangely. Sometimes those who have been dead for a few years allegedly turn up on a red carpet. Other times, important moments are visited and revisited more than once in the same brick-like volume. But in spite of the fact that the details of a given life may end up a bit out of whack, the important thing about these works is that the essential truth always outweighs (almost used the word “trumps,” which used to be a perfectly good word) the true truth.

Therefore, in all their many Hollywood screeds, it may be said that the authors are writing about the same thing: stardom. And what it costs. And what benefits it brings.

To date, Blood Moon has issued volumes on such luminaries as Lana Turner, Elizabeth Taylor, Frank Sinatra, Peter O’Toole, James Dean, and Humphrey Bogart. They also published a pip of a volume on Zsa Zsa Gabor and her mother and sisters called The Glamorous Gabors, Bombshells from Budapst that remains to this day one of the finest examples of True Hollywood Stories available today.

Over the years, Blood Moon has also branched off into the area of politics, but only in the cases of those politicians who might rightly be considered stars, in volumes like The Kennedys, All the Gossip Unfit to Print and Bill and Hillary, So This Is That Thing Called Love. Jackie Kennedy got her own volume (A Life Beyond Her Wildest Dreams) and Ronald Reagan got a Hollywood/politics mash-up in Love Triangle, Ronald Reagan, Jane Wyman, & Nancy Davis.

At the top of the Blood Moon heap is another book that involved a step away from Hollywood, with Pink Triangle, The Feuds and Private Lives of Tennessee Williams, Gore Vidal, Truman Capote, and Famous Member of their Entourages. And believe me, that one had it all.

With their new book, Blood Moon returns to form with maybe the most Hollywood of all Hollywood stories, as well as perhaps the most culturally important of all the various stars lives.

“In the dying days of Hollywood’s Golden Age, Rock Hudson was the most celebrated phallic symbol and lust object in America. This book describes his rise and fall, and the Entertainment Industry that created him.”

And they keep their promises, especially the part about the phallic symbol.

They also along the way, accomplish something more.

In the post-Harvey-Weinstein world, Hudson’s apparent willing, almost joyful complicity bewilders, especially in an oddly moving sequence in which Hudson and Marilyn Monroe exchange anecdotes concerning what each has had to do in order to attain and maintain the fame that was so important to each.

By the end of the brief conversation, it is apparent that Hudson was both better at and more willing to continue granting any or all sexual favors that he deemed necessary, or potentially pleasurable, which strikes the reader as rather a damning fact, given that the actor was at his sexual peak during a time in which it was required of him that he remain deeply and permanently closeted. And that the requirement that he held his sexuality secret was made of him by the very men who he continually “sucked up” to in order to continue in his guise as a macho leading man.

The fusion of this macho stance, this sexually charged gay man with his dumbed-down, shallow, and hollow presentation of a hetero “self” that he offered onscreen and on the red carpet (to the point of entering a false and loveless marriage for the sake of his career) brings a complexity to the character of Rock Hudson as presented on the page, and to the text itself, which transcends anything that any other Blood Moon Hollywood biography has had to offer.

Combine this with the freight train that we know is coming, the fact that Hudson will, after he has aged out of the Hollywood stud market, after he has left movies for television, contract AIDS, and still be so mired in his desire for a career long past the time that he need for fame or money could possibly be a motivating force that we will ultimately, in that notorious Dynasty episode, be willing to kill actress Linda Evans, although (A) he knew full well that he had contracted that then-deadly disease, and, (B) he could not be certain—no one could, in the mid ’80s—that he was not able to spread the disease with a single kiss.

The Rock Hudson in these pages has been placed there somewhat tenderly.

And the man who strides in in the opening chapters, someone so tall and broad-shouldered that his first agent named him “Rock,” becomes something bewildered and then frightened and then rather hopeless as he (A) watches the world pass him by in its search for “the next Rock Hudson,” and then (B) notices daily from—what?—age 35 or 40, as his “erotic fire” fades to flickering coals, as Hudson, over the years, has to count on his money and his mansion more than this profoundly good looks and his apparently oversized male organ to bring in the men. And finally there’s (C), when he begins to notice night sweats and rashes and the fact that he is losing weight.

There’s a lot of freight here, a lot for the authors to dig into. It seems, in reading it, that Porter and Prince (sounds like a Broadway-musical-writing-duo in a Fred Astaire movie) decided that they would do the guy proud. And in presenting him as a confused, complex, vain, lecherous, fame-obsessed narcissist who is also a bit of a dim bulb, they do. And they manage to sustain the bio for their usual 700 pages without for a moment losing the reader’s interest.

There is a question that needs answering. This is a Blood Moon Hollywood biography—is there sufficient sex in it?

The reader wonders how the man ever managed to make one movie, much less the myriad films that he turned out. Most of us would have had to have rested far more than he and acted far less.

No man was safe. As were few women. (Judy Garland, apparently, was one of his conquests, as were Tyrone Power, Anthony Perkins, Jane Wyman’s husband, Fred Karger, Montgomery Clift, Jeff Chandler, Robert Taylor, Hugh O’Brian, and Tab Hunter. Only Errol Flynn—Hudson’s equal with both men and women if gossip is to be believed—avoided being bedded by Rock, and then only because he was drunk, sad, and had a broken ankle.

Instead, they compared notes.

Like all the best True Hollywood Stories, Hudson’s has high-highs (he was the number one Hollywood Star for seven years) and low-lows (his rotten childhood, his apparent inability to ever be able to share his true being nature or to have true intimacy in any relationship) with plenty of stardust and glitter tossed about in between.

Get past the many, many penises on parade in these pages and there is something stirring. Something that will surprise the reader and, by page 700, move him.