Rock Concert: An Oral History of an American Rite of Passage 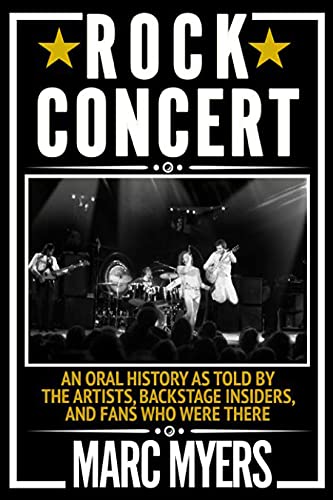 “This revealing, nicely crafted account of rock performers from Bill Haley and His Comets to Pink Floyd will appeal greatly to nostalgic rock fans.”

Seymour Stein, who would later co-found Sire Records, was a 13-year-old kid from Bensonhurst, Brooklyn, in 1955, when he started going to Alan Freed’s rock ’n’ roll revues at New York’s Brooklyn Paramount theater. With three corned beef sandwiches packed by his mother, Stein would sit through all three shows (from 9:30 a.m. to 6:00 p.m.) featuring performances by Buddy Holly, the Moonglows, the Platters, Frankie Lymon and the Teenagers, the Five Satins, and others.

“Everyone was screaming throughout the shows,” he recalls in Marc Myers’ oral history Rock Concert. “It was very emotional for me. Tears were often running down my face.”

From those early rock concerts presented by disc jockey Alan Freed to the Live Aid benefit event of 1985, Myers recounts not only the history of live rock performances but the rise of rock music itself. “Through rock, the youth culture had a voice,” he writes.

The music would change, new forms of rock would come and go over the years, but the early Alan Freed events set a pattern. Freed had brought his strong interest in rhythm and blues records—so-called “race music”—with him from Ohio radio stations to New York. In the Midwest, he had a largely Black audience. On WINS Radio in New York, he added many young white listeners to the music he termed rock ’n’ roll.

“His live shows in New York were the first large integrated rock ’n’ roll concerts,” says his son Lance Freed. Little Richard used to call them “chocolate and vanilla together,” he says. Years later, Lance met Rosa Parks, who told him: “Your father helped desegregate this country with music.”

By the mid-1950s, the music shifted, says Myers. No longer dwelling on sex, drinking, and other adult themes, rock turned to teen anxieties and social issues—cars, dating, breaking up, and falling in love. As white teens came into their own—and their own allowances—they made the music theirs.

Myers goes on to trace the flowering of rock music and live performances from the folk, pop rock, and Beatles booms of the early ’60s to the great outdoor rock festivals (Monterey Pop, Woodstock) later in the decade. By the 1970s, huge indoor events in sports arenas featured outrageous costumes and makeup, together with spectacular audio and visual.

“For our Fly Like an Eagle tour in 1977, we had gone from footlights and Super Trouper spotlights on earlier tours to rear-projection screens, a massive overhead lighting rig, and an onstage green laser light show,” says Steve Miller, founder of the Steve Miller Band.

By then, concert events were supersized, writes Myers, and fans had begun attending entire tours of the Grateful Dead and other performers. Bruce Springsteen and others were singing about “the darkness that had fallen over working-class homes, especially in the country’s heartland.”

Throughout Rock Concert, Myers goffers glimpses into the backstories of performances. “To get physically in shape for our tours, Bruce started weightlifting in around ’82 and got into condition so we could work harder,” says E Street Band drummer Max Weinberg. “On the road and at home, he worked out every day.”

The rise of MTV in 1981 gave new importance to the look of rock stars. But by the end of that decade, with the increased popularity of country and other musical genres, rock shows signs of fading, failing to “connect meaningfully with the youth culture’s current concerns and agenda.”

There had been sweeping cultural and technological changes, including free downloading, which diminished album sales, and greater dependence on tours as a major source of income for rock musicians. Marc describes all the forces at work, including “the loss of vast segments of their lucrative concert-going audience over social-media backlashes” as well as the obliteration of that financial pipeline during the COVID-19 pandemic.

In all, Rock Concert chronicles a remarkable 35-year run of rock concerts, sustained by the sons and daughters of “screaming” youths like those encountered by young Seymour Stein from Bensonhurst at Alan Freed’s 1950s shows.

This revealing, nicely crafted account of rock performers from Bill Haley and His Comets to Pink Floyd will appeal greatly to nostalgic rock fans.