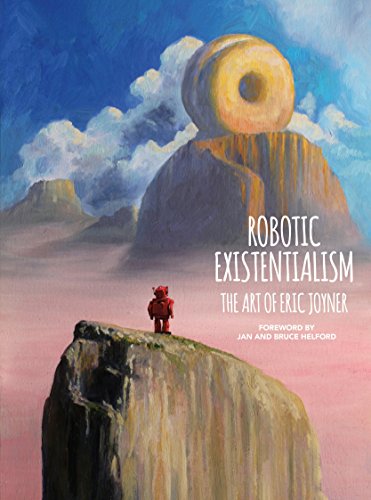 Robotic Existentialism: The Art of Eric Joyner is a playful fantasy picture book that celebrates the “what if” of robots having free rein to live “human” lives.

It is a romp of the imagination for people who are techno geeks and love everything robot. It will definitely elicit a chuckle, or a shake of the head, when you see robots having a picnic, surfing, dating, playing volleyball, or golfing.

Apparently the other thing that Eric Joyner loves as much as robots are donuts and glazed crullers. They are everywhere in his paintings in the most absurd and delightful ways imaginable.

The paintings play on themes from alien earth invasion to Godzilla-like gargantuan threats, and occasionally Joyner lampoons or draws inspiration from other artists like George Bellows’ The Art of Boxing, Auguste Rodin’s The Thinker, and Edward Hopper’s Nighthawks.

And the variety of robots is something to behold. From your typical Japanese wind-up toy robot, to rock-’em sock-’em robots, to Forbidden Planet’s Robbie the robot, they are all represented.

Joyner’s paintings are often quirky, strange, bizarre, or whimsical, and at times tinged with impressionism or surrealism, but never hit the mark of realism. His style is somewhat loose rather than precise, and inclined toward fanciful humor rather than anything serious.

His painting style varies from paint-by-numbers flat color to loose style broad-stroke painterly. It indicates that he is so skilled and accomplished that he is capable of painting very realistic scenes if he desired to do so.

An illustrator who is also an avid collector of toy robots, Joyner decided to make robots sprinkled with donuts (pun intended) his specialty. Joyner’s paintings remind one of the clown paintings of the 1970s or paintings on black-velvet kitsch. Clearly, they are not for everyone. But if you happen to love robots and donuts, you are in luck.

The book itself is very nicely bound with a full-color hardcover, and the paintings are beautifully printed on semi-matte paper.