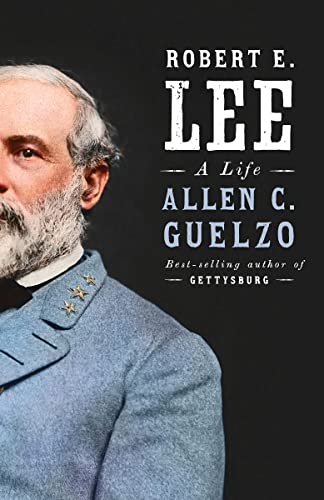 “How history should be written . . . brilliant.”

Robert E. Lee has had dozens of biographies written about him, the first during his lifetime from fellow soldiers and family members. What more, one could wonder, could possibly be written about him? Allen C. Guelzo not only covers new ground with the incredible depth and breadth of his research, he does an exemplary job of showing how history should be written, keenly aware of historical context, contemporary values, and the space between them. As statues of Lee are taken down throughout the country, Guelzo could have written a cuttingly critical work. Instead, he is scrupulously even-handed, depicting Lee in all his glory and all his faults.

History is messy. There is no straight line, much as textbooks would have us believe. Guelzo does a brilliant job of capturing the mess, from the first stirrings of the idea of the southern states seceding from the Union. The southerners blithely assumed the north would simply let them break away while the north thought the south would be quickly brought to heel. Neither side imagined the long bloody war that would follow.

Lee’s character is charted from his earliest days by first describing his parents and grandparents, their entrenched federalist ties, making his treasonous choice of the state of Virginia over his country even more surprising. Lee’s training as a military engineer, his career as a soldier, his experience in the war with Mexico are all laid out as the background for his later critical decisions.

The big questions Guelzo probes are the ones that are hot topics today. Was Lee the voice against slavery that has been asserted? Was he a traitor to his country? Was he even a brilliant general or simply a convenient symbol of confederate values?

The slavery question is complicated, and Guelzo gives a nuanced answer:

“Lee insisted it was the violence of the abolitionist solution that alarmed him, not a love for slavery itself. ‘In this enlightened age, there are few, I believe, but what will acknowledge, that slavery as an institution is a moral and political evil in any country.’ . . . Lee entertained no illusions about the ‘positive good’ of enslaving other  human beings. . . . But he had convinced himself that the ‘greater evil’ of slavery was ‘to the white’ rather ‘than to the black race’; hence it was up to the whites to decide when enough was enough.”

Lee’s family believed the solution was to send slaves back to Africa. The thought of having free Black neighbors was one they didn’t want to entertain. After many pages exploring Lee’s jumble of racist views, Guelzo sums up his character on this aspect by comparing Lee to his fellow southerners.

“If there is at least one favorable way to speak of Robert E. Lee, it is that his garments were cleaner in the postwar years than many of his contemporaries.”

Lee’s vaunted brilliance as a soldier is similarly explored from many angles and ends up with a thorough review of his military achievements, the biggest one being how he handled defeat, urging the Confederacy to submit to federal authority rather than continuing a long underground war against the North:

“His greatest gift to the life of the Republic was the decision to surrender his army intact at Appomattox and ensure that the Civil War did not pour over into a more hellish and protracted phase of full-tilt guerilla warfare.”

The big question that runs through this exhaustively researched history is that of treason. How could such a loyal soldier, a man with a long history with the federalist cause, take up arms against his country? How could he choose his state, Virginia, over his nation?

In a letter written before the war, Lee claimed he “would never bear arms against the United States,” even though he would “carry a musket in defense of my native state, Virginia.” In an interview after the war’s end, he seemed to have forgotten that stance, explaining, “I was opposed to the war at the outset. I wept when I heard of the bombardment of Fort Sumter . . . but when Virginia, my native State, seceded, there was only one course for me to pursue, namely to follow her fortunes.”

What was the reason behind this change, this willingness not only to fight his own country, but to turn down President Lincoln’s offer to lead the Union army and to instead accept Jefferson Davis’ commission as a general in the Confederacy? Guelzo suggests the issue wasn’t states’ rights or slavery, the convenient excuses given by others, but property. Lee wanted:

“to save Arlington and the other Custis properties for his children, and to dodge a betrayal of the broad web of his relations . . . By accepting an invitation to take a role in determining Virginia’s military response, Lee might actually be in the perfect position to ensure that peace would be the result rather than war and save the Custis properties from molestation by either federal or Virginia authorities.”

Lee may have told himself he was choosing a position to influence a more peaceful resolution, but in the end, Arlington was lost and so was the cause of the South. Guelzo leads us through Lee’s fateful choices clearly and with a wealth of material. He neither exonerates nor blames Lee, instead presenting a clear portrait of the man and his times. He finishes with a strong epilogue of how Lee’s name has continued to echo to this day. Lee lives now as a symbol, one that we as a nation are still wrestling with how to handle. Reading more histories like these would be a good start to dealing with our country’s racist past and the ways it permeates into the present day.