Roar: Sulak Sivaraksa and the Path of Socially Engaged Buddhism 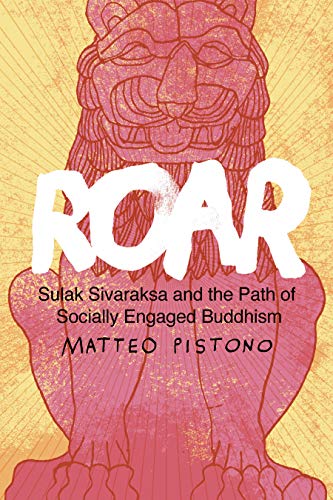 “even readers already somewhat familiar with Sulak’s extraordinary life will find many things here to engage and surprise.”

The title of this book—explained in Chapter Eight—refers to two important scriptures in the Pali cannon where the Buddha likens himself to a lion and equates his teaching to a lion’s roar. The Buddha also urged his disciples to go forth boldly and “roar their lion’s roar” for the benefit of all beings, and “Sulak’s voice of dissent and criticism, and his cries for social change have been a strong response to the Buddha’s call to action.”

This biography of Sulak Sivaraksa will be most accessible to readers who already have some knowledge of Thailand’s history and culture and preferably also of Sulak and his varied milieu, though it will be even more enriching for readers who have yet to penetrate beyond the country’s highly successful commercial image. Indeed the commercialization of his country that he referred to by its historical name, Siam, was one of the many things Sivaraksa crusaded against in his development of “socially engaged Buddhism.”

Matteo Pistono, who has written extensively about Tibetan Buddhism (Mahayana as distinct from Theravadha, the Buddhism of Thailand), captures the complex and often seemingly contradictory evolution of Sulak’s thinking and actions; a monarchist who openly criticized the Thai King Phumipol and had to flee twice into exile to avoid the consequences of his crimes of lèse-majesté; a devout Buddhist who criticized the institutionalization and bureaucratization as he saw it of the Thai Sangha (Buddhist Monastic Order); and a critic of Thai and other elites, who was not above a bit of elitism himself.

Throughout the book we are reminded of his attachment to a good red wine.  One former prime minister who both supported and criticized Sulak summed up his situation as follows: “His heart is royalist, his head is slightly socialist.”

Whilst Pistono profoundly acknowledges Sulak’s contribution to “socially engaged Buddhism” through his actions, writing, and founding of organizations and networks this is not a hagiography by any means and shows with warts and all how almost all of Sulak’s colleagues, family, friends, and disciples have at some time broken with him, only sometimes to return.

Some of the most vivid images of his complex values and presentation of self come from his early years in England where his applications to Oxford and Cambridge failed, in large part because of his poor English language skills. This was a bitter blow that took him to the University of Wales in Cardiff, though he continued fully to embrace the manners of an English country gentleman down to the cane and the cap.

After studying law in London and working for the BBC he returned to Thailand in 1962 and began to inveigh against the military regime that had repressed all intellectual freedoms, American culture well installed in Thailand to combat communism in Southeast Asia, and the dominance of capitalism and commercial thinking.

It was during this early period that Sulak founded his first publication the Social Science Review on the model of the UK Encounter and the Atlantic Monthly in the States. His editorship of the review made him a dominant progressive intellectual force partially credited for the eventual overthrow of the military regime in 1973.

As part of his engagement with reforming Thai society and values Sulak continued to travel widely and to explore other religious beliefs, notably that of the Quakers in the US, and the Buddhisms of Tibet (Mahayana) and Vietnam (Vajrayana), through his relations with the Dalai Lama, and Thich Nhat Hahn respectively, in order to develop a more resilient and socially relevant Buddhist practice for Thailand and elsewhere.

Despite his progressive thinking Sulak has often been accused of chauvinism toward women, and Pintero considers that while Sulak has always promoted gender equality he has not always demonstrated it. Sulak is deeply grateful for the support of Nilchawee his wife of many years, whom he considered “very contented and kind . . . not overambitious,” and though not following his radical way of thinking, always happy to support him, his workload, his disciples and his exiles. Nilchawee herself is fond of saying, “There has never been a microphone that Sulak didn’t want to make love to,” so is clearly her own woman.

Born on March 27, 1933, Sulak is still “roaring.” And even readers already somewhat familiar with Sulak’s extraordinary life will find many things here to engage and surprise.