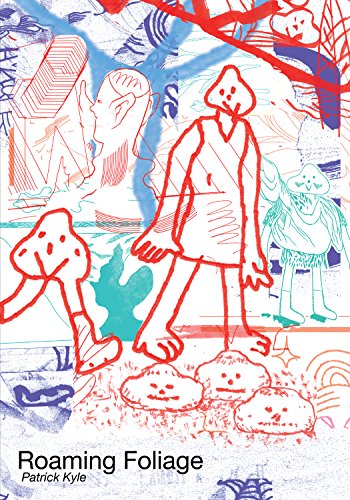 This is a golden age of independent comics. Artists develop singular approaches, cultivate followings online, and burst into the print scene with fully developed universes and styles. Patrick Kyle both does and doesn’t belong to this age. He’s hard at work, but though he does commercial illustration, his comics emerge from print and small press culture.

Kyle’s visual style is as resistant to the mainstream as his publishing approach. While many artists produce anime-influenced, color-saturated worlds with stable rules and characters, Kyle pushes at the boundaries of acceptability. His artwork skews black lines across the page. Perspective breaks, and characters stagger from page to page, shadowless and undefined. Fonts change within individual speeches. Even directions transform, so that readers must reorient the book in order to continue.

Roaming Foliage features a narrative as hallucinatory as the title suggests. Two adventures overlap and occasionally intersect. In one, two boys (plant-boys, bulbs moving on leaflike feet) set out to find a fungus that can sustain the master-builder robot who produced a “special suit” of non-euclidean lines and curves.

In the other, a girl adopts a disembodied head (since not all bulbs have leaves) and carries with her as a kind of hat with its own, independent desires. A pumpkin lurks at the edges of the page, insulted at its lack of influence. Both groups wander a kaleidoscopic garden marauded by invasive dogs.

Roaming Foliage’s reality is unstable. The garden’s details have no objective existence, but instead emanate from the moods of Rotodraw, the builder-robot. One wandering boy informs his friend, “When Rotodraw is prosperous the garden reflects his prosperity. When Rotodraw is not himself the garden reacts accordingly and does things that you’d not expect any plant in any garden anywhere to do.” Now Rotodraw is in radical decline, withdrawing ever further into his home and into himself. Nothing can be trusted.

Kyle’s Brechtian approach to comics actively resists structure and convention. He interrupts the story with school-style activities for the reader. Horrific events are erased, only to re-emerge later. And the boys, particularly, act less as characters than as hyper-energetic narrators imagined by children to constantly stabilize an impossible world through improbable but deeply necessary explanation.

This childishness is central to Roaming Foliage. The artwork is shaped by a pre-adolescent madness and resistance to technique. Kyle clearly has enormous range (the moments of careful geography and unexpected perspective show his skill), and he leaps full-force into Picasso’s quest to paint like a child. The originality is striking, but any reader used to consistency and careful beauty will have to suppress her fury as she struggles through these delirious pages.

Resistance to all structures inevitably creates a work at loose ends. A story that is not a story cannot come to a satisfying conclusion, and the characters cannot learn or transform when they refuse depth and development. Rotodraw, initially a minor figure, grows in significance as he shrinks in stature. The epiphany that he is not a robot but a man, the originator of this plant-based world, feels obvious by the time it arrives. The second revelation, that Rotodraw created this world by smoking a “special herb,” feels positively cliched.

The 1960s-influence in the book is clear, from psychedelic illustrations to marijuana references, and the story, such as it is, relies on the intersection of artistic alienation and wise-fool delight in the face of surreality. This has an appeal, but not a wide one. Readers primarily interested in graphic novels as art may delight in Kyle’s visual experimentation and originality. Those seeking graphic novels as conduits of story will give up early, frustrated and alienated in a way that satisfies the book’s ethos as much as persistent reading does.