The Road Home: A Contemporary Exploration of the Buddhist Path 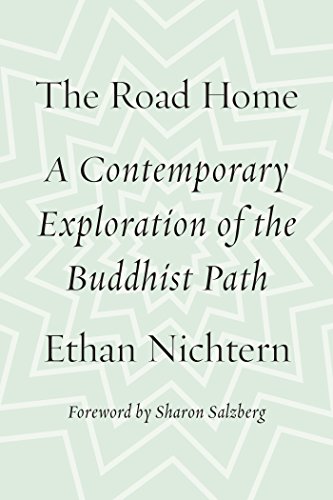 “This is not to say that the book lacks purpose, but that perhaps it takes on too much in the vastness of its overview.”

Here is Ethan Nichtern, a young teacher in the Shambhala Buddhist tradition of Chögyam Trungpa Rinpoche. Fellow Buddhist teacher, Sharon Salzberg, provides a slight introduction to this book in which she claims him as “the future of Buddhism.” He is also the author of One City: A Declaration of Interdependence (2007) and the founder of the Interdependence Project.

While one can accept him as a kind of hip explainer and apologist of Buddhism for new audiences, one hopes for more from him and for Buddhism.

Nichtern has the formula down, and provides us with four basic sections: “The Journey of Self-Awareness,” “The Journey of Relationships,” “The Sacred Journey,” and “Society’s Journey.” Within these are the numbered lists of twelve stages of karma, the five precepts, etc. Here is a sample of his teachings:

“The Sanskrit word samsara—which traditionally represents the summation of all our confusion and destructive patters of behavior—literally means “wandering around.” The Tibetan word for a sentient being caught up in confusion—drowa—could be translated as “always on the go.” I like to think of this word as meaning “commuter.” For the standpoint of our struggle, we are wanderers, commuters addicted to a state of transit, always thinking that we will be most satisfied somewhere other than here.”

The style and tone is that of a teacher trying to explain, using a textbook yet reaching for examples to make it relevant. The tone of the book becomes dogmatic and lacks the maturity and wisdom of older teachers, say Thich Nhat Hanh or Pema Chodron or Ezra Bayda. Here’s an example of this lecturing tone:

“Promoting life stands in contrast to refraining from the negative action of mindlessly taking life, or killing. While the practical application and debate of this question often involves the consumption of mean, the question is actually much broader than that. . . . Within this contemplation, we turn our thoughts to the basic question of how our habitual aggression causes us to thoughtlessly destroy or hinder the energy of situations around us.”

Nichtern’s tone and stance thus push the reader to an awkward position. One feels outside of Buddhism looking in, rather than inside listening and gathering in. Perhaps this tone may appeal to novices as an “Introduction to Buddhism 101,” and it may prove useful, but this reader feels let down.

This is not to say that the book lacks purpose, but that perhaps it takes on too much in the vastness of its overview. One misses the presence and intimacy of the moment that it so advocates. The book is a storehouse of information and charts, followed by a welcome list of “Suggested Readings.”