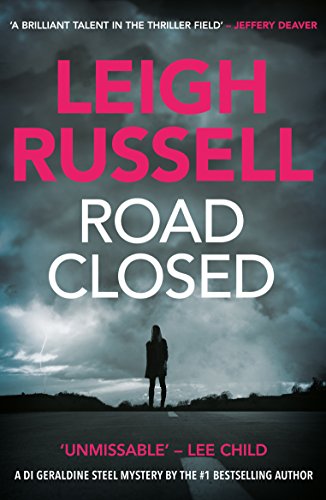 Road Closed is the second crime novel by Leigh Russell, featuring Detective Inspector Geraldine Steel. We were first introduced to Steel in the gritty and totally addictive debut novel, Cut Short, and once again Russell is in top form with this new crime thriller.

Road Closed hardly gives you time to catch your breath, starting with the brutal murder of an elderly lady by two depraved and dope-induced thugs burglarizing her home. Fast forward, and a man dies in a horrendous gas explosion, seemingly unconnected. Police quickly suspect an arsonist is involved, and the Murder Investigation Team along with Steel are called in to investigate what exactly happened.

But it’s not too long before the case takes on a new and even more sinister twist when a local villain is viciously attacked. As the police inquiries lead from the expensive Harchester Hill estate to the local brothel, a witness dies in a hit-and-run. Was it simply a bloody coincidence? Or was it an even bloodier murder? Meanwhile, the Team has problems of its own to wrestle with—as does Steel. A shocking revelation threatens her peace of mind as the investigation races toward its dramatic climax. . . .

Geraldine Steel is a complex and highly driven character, with multifaceted feelings of contradiction and nuance—though it has to be acknowledged that there is a certain emotional detachment emitting from her. She is already struggling with a failed relationship, and the conflicting and almost apathetic feelings about the death of her mother are revealed saliently to us in a telling lapse:

“Geraldine sighed and made her way back to the police station to type up her report but she found it hard to settle. She kept thinking about the widow’s eyes glaring wildly in her pale face, like the eyes of a trapped animal. That was what grief looked like, Geraldine thought with a guilty pang; she hadn’t even cried at her own mother’s funeral.”

There are other little clues about Steel’s state of mind and emotions, scattered throughout the book for the reader to discover.

Like all good crime and thriller writers, Russell gives us just enough morsels of information in each page-turning chapter to whet our appetites for the bigger banquet at the end of the book. Road Closed is a gripping, fast-paced read, pulling you in from the very first tense page and keeping you captivated right to the end with its refreshingly compelling and original narrative. The rapidly building fan base of Russell and Steel will be on the edge of their seats waiting for the next installment, tentatively titled Dead End.