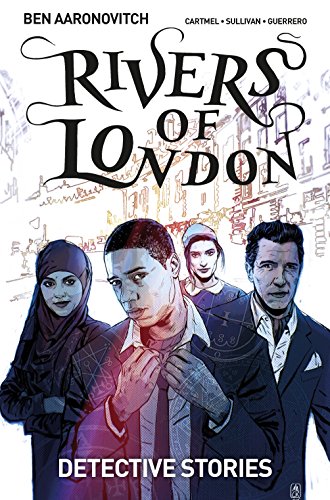 The first Rivers of London traditional novel was published in 2011. This book has almost 52,000 ratings and 6000 reviews on Goodreads. It earned a four star Goodreads collective assessment and 4.4 stars on Amazon. Since that publication, the Rivers of London characters have been included in a series of novels and assumed visual identities in several graphic novels. Their most recent graphic adventure became available for sale in December 2017. It well complements both series. Fans of Peter Grant and his spectral colleagues should add this edition of detective stories to their collection.

The plot lines of the multiple free standing stories in this volume are easily followed. The art enhances each story almost to the threshold of existence as a TV mini-series and makes them easy to follow.

The first story finds Grant investigating the fiery demise of a goat brought about by gods in training. A failing grade in training becomes fatal to a god wannabe. The second story is a riff on The Portrait of Dorian Gray. A centuries old sketch is added to, not stolen from, an important art gallery. Uniquely, its subjects may still walk about in 21st century London.

Story three involves a jazz club, its sultry chanteuse, a jealous husband, and a murdered private detective, all of whom could have flowed from the pen of Dashiell Hammett, but with a twist. Dead men it seems do tell tales, tall tales.

The fourth story begins with a plot head feint and settles into a seemingly mundane case of a public flasher. However, this story is really the point of the book. Peter Grant’s detective skills and dedication to the cause are being tested by his superiors.

Each story is told in flashback format as a Detective Inspector reviews closed files handled by Grant to assess his competence. Each story is about events that do not result in a crime that can be prosecuted. This is a unique twist that confounds the supervising Detective Inspector. Competence and fun abound in both the stories and art.

Of interest, several educational asides are included in the volume. These asides explain otherwise obtuse references in the stories. How else would the reader fully comprehend the Enochian language integral to the occult underpinnings of the first story or know what a thief-taker might be as mentioned in the concluding tale? The author’s history lessons add further color to the world of Peter Grant.

The next Rivers of London edition, Cry Fox, is due in May 2018. Don’t miss it or the current volume of detective stories.