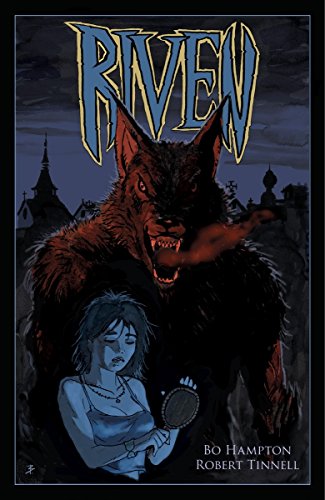 As the air becomes brisker and steps are amplified by the crunching leaves underfoot, readers’ tastes grow darker and the hunger for horror must be sated. Luckily, Riven is a most delectable appetizer.

We are introduced to the Harringtons, an American couple who’ve journeyed to Ceausescu’s Romania in order to adopt a daughter. They are delighted to take home Katya, a pretty four-year-old brunette with haunted eyes, the last orphan available.

Flash forward 10 years, and we find Katya in an unfortunately familiar high school situation: hiding in the bathroom trying to figure out how to go home without everyone noticing that her entry into womanhood has caught her unprepared.

Katya’s best friend Meg comes to her rescue, as the best BFFs always do, and they are able to leave school with none the wiser. While walking along a bridge, Katya is suddenly transfixed by the water and begins to have strange images flash before her eyes: red, a woman, a lady with scratches along her face, a woman screaming. Reeling, Katya begins to fall in front of an oncoming truck but recovers enough only to plunge over the bridge’s rail, smash her head into a rock, and fall into a five-year coma.

Flash forward five years, and we find Katya still in her coma. Unlike other coma patients, however, Katya has had no muscular degeneration and her brain activity has been spiking—spiking every 28 days when the moon is at its fullest. But on this day, in her new room, the full moon’s rays breach the window, illuminate her body, and Katya is finally awakened.

Making up for lost time, Katya quickly reconnects with her friend Meg, begins tutoring under a new friend, Trey, and attempts to experience all the fun she slept through. But with her behavior becoming more and more erratic, Meg and Trey are forced to walk away, leaving Katya to face her own demons.

But when Katya’s Romanian cousin Gregor tracks her down, and implores her to return to Romania to end their family’s curse, Katya finally realizes that her visions have not been madness but rather a horrifying view of a werewolf’s carnage through the eyes of the wolf himself—and she could be next.

Bo Hampton and Robert Tinnell have written a smart werewolf story that will have you guessing up until the end. Every time you think you know where this is headed, they take your idea and turn it on its head.

The authors incorporate hallmarks of classic werewolf tales: small Eastern European villages, peasants, silver bullets, pack mentality with none of the cheese. They are also able to slip in the werewolf symbology of puberty (common) and menstruation (not so common) with such a deft hand it will be instantly recognizable to women but not off-putting to men—a feat not easily accomplished.

The American characters are extremely well rounded and relatable, while the settings in Romania are an authentic image of a country a little down at the heel but still in recovery.

The art wholly supports this dark, twisty tale as we are given scenes shrouded in misty moonlight and snowscapes leaving you absolutely chilled. Nudity is never gratuitous, rather handled with grace and subtlety. If you look closely you may catch a little bit of Bernie Wrightson’s influence.

When autumn finally arrives, and you want a good read. When you don’t want your werewolves to fight sparkly vampires or live in the backwoods of Louisiana. When you’re ready to go old school with a fresh take, Riven will definitely get you there.