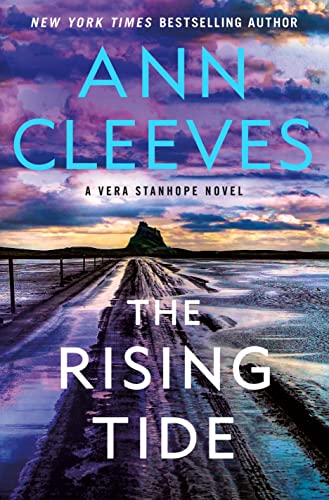 “The quality of Ann Cleeves’ writing far surpasses that of the usual police procedural. It is tremendously character-driven, exploring individual lives as well as aging and how circumstances and the passing of time can change people in unforeseen ways.”

For those of us who have read the earlier books, this may rank as one of the finest Vera novels yet.

The scene is the Holy Island of Lindisfarne, off the northeast coast of England, isolated from the mainland by a causeway that is flooded daily by the rising tide. There, a group of five old friends have gathered every five years for a reunion.

The group formed life-long friendships at a retreat on the island arranged by their teacher 50 years ago. Then 16 year olds, they are now sixty somethings. They include Rick Kelsall, a celebrated TV personality accused of sexual harassment by an intern; Philip Robson, an Anglican priest; Annie Laidler, co-owner of a deli; and Kenneth Hampton, a teacher with dementia, and his wife, Louise.

At the first reunion, Isobel Hall left the island in a huff after an argument and drowned in her car by a rising tide. Now, at the latest reunion, Rick Kelsall is found dead, hanging naked from a beam in his room. Despite his imperiled career, he had been enthusiastically working on a tell-all novel under contract to a major publisher. He was also obsessed with death.

When Vera is called in, she realizes Rick has been murdered—smothered and hanged—and begins investigating his death as well as Isobel’s suspicious-seeming drowning years ago.

The case is complex, troubling (“All these respectable elderly people making out that they’re innocent,” muses Vera), and eventually places Vera and her crew in great danger.

With help from Joe Ashworth, her sergeant and sidekick, and Detective Constable Holly Jackman, Vera soon discovers the case also has political implications and that her suspects have something to hide. The foreboding atmosphere is heightened by the mist-shrouded island itself with its perilous tides.

At their initial exercise in bonding on Holy Island in the 1970s, the group had been thrilled by their teacher’s encouragement of openness and honesty about their feelings. It was in great contrast to the strict conformity of their school life at Kimmerston Grammar.

Even now, 50 years later, their conversation still focused on “sharing memories, telling the same old stories, because if they were talking about the past, somehow, they didn’t have to think too much about the present.”

As she and her team interview the reunited group, their friends, spouses, exes, and others connected to the case—including police commissioner Katherine Willmore and her young daughter, who turns out to be the former intern who accused Rick of harassment—Vera realizes that this is a case where the past strongly shapes the present.

There is so much to admire in Ann Cleeves’ telling of this baffling story.

The plotting is exquisite. It keeps the reader continually in the dark, offering an array of suspects, but few clues to the nefarious island events, which soon include the death by smothering of yet another member of the reunion group—Rick’s ex-wife Charlotte, a model-turned-life-coach and the daughter of a criminal.

Vera remains as delightfully quirky as ever, both in her observations and in her interactions with members of her team. “What is it with the place?” she wonders. “It’s as if the island’s some sort of magnet, sucking people in. Some bloody black hole.”

The quality of Ann Cleeves’ writing far surpasses that of the usual police procedural. It is tremendously character-driven, exploring individual lives as well as aging and how circumstances and the passing of time can change people in unforeseen ways.

The tension and suspense never let up. The ending is startling, the motive behind the troubling mystery of Holy Island is unexpected, and we are left to wonder how the resourceful Vera Stanhope will cope in the days ahead.

A knockout novel from a hugely talented writer.

Joseph Barbato is a staff writer at New York Journal of Books.