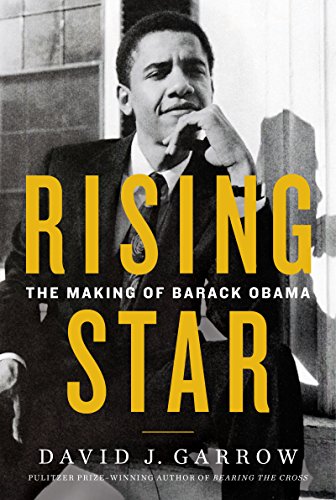 “Rising Star is an epic triumph of personal and political biography.”

What motivated the Pulitzer Prize-winning historian and law professor David J. Garrow to write an incredibly detailed 1078-page (1460 pages with endnotes and index included) biography of Barack Obama from conception through election to the White House? Not a great personal affinity for Obama.

Rising Star: The Making of Barack Obama is no hagiography. On the last page of this remarkable tome, Garrow describes Obama at the end of his distinctly non-transformative and “failed presidency” as a man who had long ago had become a “vessel [that] was hollow at its core.” His “eight years in the White House,” Garrow says in his final sentence, “had revealed all too clearly that it is easy to forget who you once were if you have never really known who you are.”

The subject of Garrow’s meticulous history is a single-minded climber ready to distort his own history and toss others aside in service to an all-consuming quest for political power fueled by a belief in his own special “destiny” for greatness.

Dozens of former Obama associates interviewed by Garrow report having been impressed and even blown away by the future president as a young man. But many others were put off by Obama’s sense of superiority, arrogance, professorial pretense, and transparent hyper-ambition.

During Obama’s time at Harvard Law, fellow students invented “the Obamanometer”—a mocking measure of how long Obama would take up class time with long-winded rhetoric, often claiming to speak on behalf of his fellow students.

Progressive lobbyists found Obama “a disappointing legislator” during his time in the Illinois Senate. According to Al Sharp, executive director of Protestants for the Common Good, state senator Obama was “so very pragmatic” that “he,” in Garrow’s words, “was unwilling to fight to the good fight.”

Garrow takes aim at Obama’s own account of his first 35 years in the future president’s 1995 memoir Dreams From My Father. By Garrow’s painstaking analysis, Obama’s first book about Obama is “a work of historical fiction.”

Rising Star takes Dreams and some of Obama’s later autobiographical reflections to task for (among other things): inventing a deep racial identity drama that never occurred during Obama’s youth; misrepresenting Obama as a leader in college student movements against South African apartheid; concocting a mythical and supposedly life-changing dialogue with a “black security guard” on Obama’s first trip from New York City to begin community organizing work on the far South Side of Chicago; falsely claiming that Obama converted to Christianity during his early years in Chicago; largely writing Obama’s mother out of his history; painting a “decidedly uncharitable portrait” of Obama’s loving white maternal grandfather; unduly downplaying Obama’s enjoyment of his years at Harvard Law School; coldly condensing his three leading pre-marital girlfriends “into a single woman whose appearance in the book was fleeting indeed.”

As in his also giant and epic 1986 biography of Dr. Martin Luther King Jr., Garrow delves deeply into his subject’s love and sex life. He reports the complaints of Obama’s top three former girlfriends—Alex McNair, Genevieve Cook, and Sheila Jager. Each recall an Obama who was ultimately inaccessible and compartmentalized.

Jager garners special attention in Garrow’s account. She was engaged in a long and passionate affair with Obama that was ultimately doomed by the color of her skin. The Asian-American Jager could not marry Obama because his Chicago political ambitions required him to have a black spouse. Garrow quotes Jager at length on how (she told the biographer four years ago) “the seeds of [Obama’s] future failings were present” in young man Obama’s calculated taste for the “pragmat[ic] . . . accept[ance] of the world as it is [over] trying to change it”—something Jager felt “stems from his deep-rooted need to be loved and admired.”

Garrow’s volume is a tour de force when it comes to personal critique and professional appreciation. Rising Star falls short when it comes to ideological appraisal however. In early 1996, the brilliant left black political scientist Adolph Reed, Jr. described an unnamed Obama as “a smooth Harvard lawyer with . . . vacuous-to-repressive neoliberal politics” whose “bootstrap line was softened by .  . . talk about meetings in kitchens, small-scale solutions to social problems, and the predictable elevation of process over program—the point where identity politics converges with old-fashioned middle-class reform in favoring form over substance.”

Garrow very incompletely quotes Reed’s reflection only to dismiss it as “an academic’s way of calling Barack an Uncle Tom.” But Reed was born out by Obama’s subsequent career, a monument to the power of the neoliberal corporate-economic and imperial agendas beneath the façade of “progressive” politics. This is missing in Rising Star, as are the considerable number of left intellectuals and activists who tried to warn liberals and lefties about what The New Yorker’s Larissa MacFarquhar described in May of 2007 as Obama’s “deeply conservative” essence.  Also unduly neglected are the elite Wall Street players (including no less august a ruling class personage than Robert Rubin).

The irony here is that one can consult Rising Star to determine the basic underlying accuracy of Reed’s acerbic depiction. The Obama painstakingly captured in Garrow’s biography is revealed to the trained eye as a fully formed neoliberal-capitalist “pragmatic” true believer before he ever receives his first campaign contribution in 1995. His years in the corporate-funded foundation world, the great ruling and professional class finishing school Harvard Law, and the University of Chicago Law School were more than sufficient to mint him as a brilliant if “vacuous to repressive neoliberal.”

Faults aside, Rising Star is an epic triumph of personal and political biography. A gifted researcher and storyteller, Garrow somehow succeeds in keeping the reader’s attention across his colossal volume—a book that will be an indispensable reference for future historians of U.S. politics, the presidency, and Obama.