Rising in Flames: Sherman's March and the Fight for a New Nation 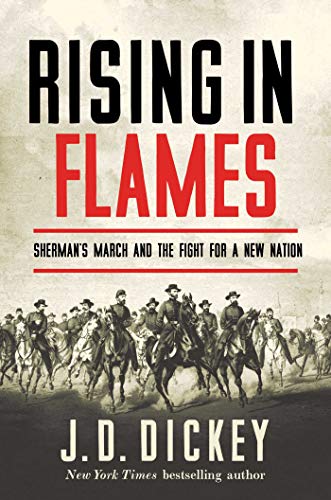 J. D. Dickey’s new book Rising in Flames could be subtitled A Politically Correct Guide to Sherman’s March. It is equal parts social history and military history. It highlights the good deeds and laudable social views of soldiers, social workers, and former slaves who contributed to the success of Union General William T. Sherman’s famous “March to the Sea.”

Union General John Logan began the war as a political opponent of Lincoln and abolition. His exposure during the war to the harsh and brutal realities of slavery transformed him into a fierce abolitionist and a Radical Republican after the war.

The Reverend John Hight served in the 58th Indiana regiment during the March. He expressed righteous anger at the South’s slavemasters, and what he witnessed in Georgia and South Carolina—whipping posts, chains, collars and other tools of human bondage—convinced him that the rebels were “reaping their just reward of their long oppression of the slaves.”

John McCline was a 13-year-old escaped slave who traveled as a paid orderly with the 13th Michigan and helped construct roads for the Union troops through Georgia and South Carolina.

Mary Livermore and Mary Ann Bickerdyke raised money, and solicited charitable donations of food, medicine, and bandages for the troops. Livermore, writes Dickey, became a “nationally known champion of the Union, the war and abolition,” and later championed women’s suffrage and “Christian Socialism.” Bickerdyke, meanwhile, traveled with Sherman’s troops, cared for them, and ran military hospitals.

These are the heroes of Dickey’s book. The Union did not win the Civil War, however, by good deeds and laudable social views. The war was won and slavery was ended by brute force and attrition warfare. Sherman’s March back then was called “hard war;” we know it today as “total war.”

It involved what Dickey rightly calls “a campaign of destruction” across Georgia in 1864 and into South Carolina in early 1865. Sherman’s plan, he informed General Ulysses S. Grant, was to make the South “howl.”

The March was preceded by a stunning Union victory at Chattanooga, where Union forces dislodged Confederate forces atop Missionary Ridge.  The victory, Dickey notes, was not the result of a brilliant plan or good generalship. Instead, groups of Union soldiers moved forward up the slope in the face of Confederate fire from the crest of the ridge.

“First in the dozens, then in the hundreds, then in full regiments and brigades,” writes Dickey, “the Union soldiers seized the ridge.” Confederate soldiers surrendered or fled. The road to Atlanta was open.

Sherman’s Atlanta campaign combined mobile warfare and turning movements with deadly frontal attacks, such as the one at Kennesaw Mountain. But in the end, Atlanta fell to Sherman’s troops, just in time to help President Lincoln’s reelection effort.

From Atlanta in November 1864, Sherman’s forces, sixty thousand strong marching in multiple columns, burned and destroyed barracks, bridges, factories, foundries, warehouses, and private homes in town after town. His troops lived off the land, foraging for their meals. “Destroying slavery,” Dickey writes, “meant crippling the labor base of the South, which in turn meant crippling the rebellion.”

As the March proceeded, slaves were liberated and they tried to tag along with Union forces. Sherman could not afford to carry such human baggage, and he allowed Union General Jefferson C. Davis (no relation to the Confederate President) to abandon hundreds of former slaves at Ebenezer and Lockner Creeks, where many drowned and others were captured by Confederate troops.

Reverend Hight called Davis’ abandonment of the freedmen cruel and wicked. “May God Almighty save the nation from the responsibility of General Davis’ acts,” he exclaimed.

Sherman’s forces reached Savannah in late December. His next target was Columbia, South Carolina, the cradle of secession. In mid-February 1865, Union troops destroyed everything of military value in the city. Several buildings caught fire, and strong winds spread the conflagration to much of the city.

“The logic of hard war,” writes Dickey, “led to anarchy, and anarchy led to mass destruction, and the result of that immoral calculus was Columbia.” More than 450 buildings burned to the ground; many others were damaged. Other towns also felt the wrath of total war. “William Sherman,” Dickey writes, “left South Carolina a smoldering wreck.”

Sherman was denounced then and ever since as a “remorseless killer” and the “great vandal” of the Civil War. Dickey acknowledges the brutal nature of Sherman’s strategy and tactics, but also recognizes that Sherman and his armies “found success beyond anyone’s measure, crippling the Confederacy’s ability to fight the war and hastening the end of it.”

Sherman’s forces moved into North Carolina, captured the capital Raleigh, and negotiated an end to the fighting with Confederate General Joseph Johnston on April 26, 1865. By then, Lee had surrendered to Grant at Appomattox and Lincoln was dead.

In the end, Dickey praises Sherman for finally understanding that the war was about “equal justice” and “civil rights.” Perhaps. What is certain is that Sherman understood the true nature of war when he remarked, “War is cruelty; you cannot refine it.”