Rise of the Warrior Cop: The Militarization of America's Police Forces 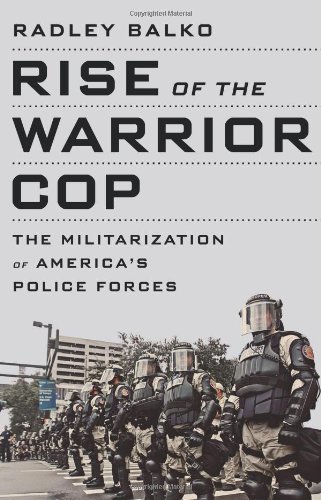 “. . . highly recommended for the historic value of the information . . . clear, concise, and well argued.”

Whether you are watching reruns of COPS or the latest police drama you will inevitably see a Special Weapons and Tactics, SWAT, team in action, complete with military style weapons, body armor, robots, and new armored personnel carriers. If you were born before 1970, you may remember name of the cop on the corner or the local deputy sheriff and find yourself asking “When did our police become a paramilitary force?”

If you were born after 1970, the black-clad cop has become the norm, and the cop on the corner or knowing the local sheriff is a memory lost along with black and white TV. Mayberry, R.F.D. no longer exists. But why?

Those are the questions Radley Balko’s Rise of the Warrior Cop attempts to answer. This historic review of America’s police and police tactics is clear and direct in its nondismissal narrative. This is not an anti-police book, but a serious look at the growth and use of SWAT and military style tactics, at America’s war on drugs, and the financial incentives that created the new “community police force.”

Mr. Balko’s story starts in my adopted hometown of Columbia, Missouri, with a raid we know too well. In February 2010 the Columbia police SWAT team executed a search warrant based on an informant’s tip and trace evident of marijuana. Mr. Balko description of the “violent, nighttime, forced entry raid” matches the video that eventually went viral.

“The cops stormed in screaming, swearing and firing their weapons, and within seconds of breaking down the door they intentionally shot and killed one of the family’s dogs, a pit bull.”

Mr. Balko looks at the “how did we get here” question from the values instilled upon our citizens and understood by the world of a free and safe society with “equality before the law,” to one of a militarized police state. He examines the build of the local sheriff and constable know to all to the small town SWAT forces that have grown over the last five-decades, the arguments for such buildups, and reforms needed.

His chapters are set into decades beginning with the 1960s, an era many believe to be the beginning of the fight. In fact we can see the beginning of the arming of our police with the beginning of the Civil Rights movement and enforcement of segregation; but this was not strictly a southern problem. In the north it was a newly declared war on drugs, one that created to demonize the possession of small amounts of marijuana to an offense bigger than robbery or murder.

We are walked through President Richard Nixon’s District of Columbia crime bill and the eventual passage of federally sanctioned no-knock raids. But Mr. Balko also speaks to the likes of DC’s Metro Police Chief Jerry Wilson who backed away from the violent and majority white police force to one that represented the city’s black majority population, telling TIME magazine that “The use of violence is not the job of police officers.”

The most telling number is that while under Wilson’s watch, crime in DC dropped over 25 percent with the overall crime rate in the United State rising by almost the same amount.

The 1980s and the conservative drive toward reduced civil rights and revoking the Miranda reading is told fairly. We are walked through the need to expand the use of the military to the war on drugs and the establishment of the 1981 Military Cooperation with Law Enforcement Act. Yet it was not just the President and Congress; the courts had their hand in the expansion of the war.

In the 1983 ruling in Illinois v. Gates, the “good-faith exception” rule was “carved out,” leading to the weakening of the Fourth Amendment and was formalized in U.S. v. Leon in 1984. Mr. Balko continues his review with earnest and seems to focus on the conservative leadership for our current mandates. That is until the next chapter.

The Clinton “Community Policing” initiative was supposed to ease the tensions between the police and communities. It instead expanded the use of the SWAT team to smaller and smaller communities. Mr. Balko shows how this really became a keeping up with the Jones’ action. Between 1970 and 1975 along the number of SWAT teams grew from 1 to almost 500.

Many would argue that the police have been woefully outgunned over the years by the Symbionese Liberation Army (SLA), at Ruby Ridge and Waco; by the 1997 North Hollywood bank robbers clad in body armor and 3,000 rounds of ammunition, and the 1999 shooting at Columbine High School justified such growth. But Mr. Balko disagrees with these assessments and artfully lays out his position.

What Mr. Balko is really arguing is the expansion of the war on drugs and the financial gains that can be made by even the smallest police department; that the “numbers” are more important than the results seeing a doubling of drug warrant SWAT raids between 1995 and 2005. That the new anti-drug laws are slowly dismantling constitutional protections, including those provided by the little used Third Amendment and have done little to deter crime. It has us questioning why a town of under 30,000 needs 30 M-16 rifles and a “sniper targeting scope” along with 44 bayonets.

Mr. Balko’s suggested reforms are not new or ground breaking. Ending the war on drugs and the federally bounty system of award property confiscated in federal raids to the local policing authority. To create more transparency of the local and county police to the community and have new state legislation that clearly states a citizen’s course of actions is wrongfully arrested or detained.

The 1990s Clinton Community Policing policy and grants was a good idea gone bad. The values of “Serve and Protect” need to be refocused on the citizens not the police officers, to demand accountability and to change the general police culture.

This book is highly recommended for the historic value of the information; it is clear, concise, and well argued. Whether you are a lifetime, card carrying member of the ACLU or the newest law and order politician The Rise of the Warrior Cop provides a clear timeline and important information making it a must read despite the fact that the author provides no new answers.