The Rise of the Naked Economy: How to Benefit from the Changing Workplace 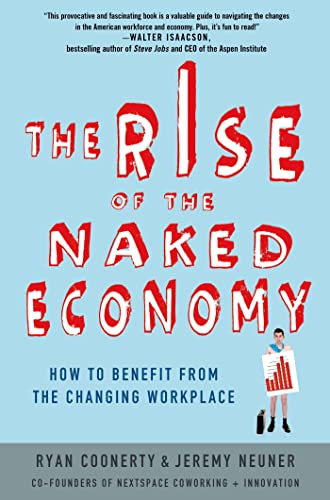 “Whether you are suited to working naked or not, it is coming to your city—in fact, it's already here.”

Thanks to the Internet, people can work from almost anywhere, wearing almost anything or even nothing, as the authors of The Rise of the Naked Economy suggest. But the concept of a "naked economy" goes far beyond grooming or attire.

This book is about how the ability to work from anywhere is changing the way work happens. We can either roll with those changes or be rolled over by them—both as individuals and as a society.

The authors of The Rise of the Naked Economy themselves illustrate how a "career" has changed from a single focus to a series of events with lots of side journeys and unexpected twists.

Ryan Coonerty is the former mayor of Santa Cruz, California—an outpost of free-thinkers just south of Silicon Valley. Jeremy Neuner is his former economic development manager. Together, the two formed the real estate startup, NextSpace, a pioneer in "coworking" (renting shared work facilities by the hour or day rather than tying up capital or tying down employees).

The authors have a vested interest in fostering the naked economy, but it is hard to find people this knowledgeable about the shifting patterns of employment who don't have some vested interest.

In the course of running a city of 57,000 people, the authors have been privy to the sorts of economic briefings and research that entrepreneurs usually struggle to find.

In The Rise of the Naked Economy they break it all down for the small businessperson and the individual worker. What does this shift to a Freelance Nation (the title of a book very influential to the authors' thinking) mean for us as individuals, families, city dwellers, citizens, and members of a global society? Here's a nice paragraph to sum it all up:

"Following the recent economic downturn, the employment rate has recovered at a frustratingly slow pace, except in one area—you guessed it—temporary workers. Between 2009 and 2012, according to the Bureau of Labor Statistics, the number of temporary employees rose by 29 percent. A survey of the 200 largest companies found that temporary workers represented, on average, 22 percent of their workforce . . . and that percentage is growing. Nissan, FedEx, Caterpillar, Wal-Mart, and Amazon use temps as a business strategy. Businessweek reports that firms like Manpower, Kforce, and Kelly Staffing Services are seeing significant growth because of 'robust demand' for their workers. Penelope Trunk, who blogs about 20-somethings, may have said it best when she told National Public Radio that 'we are increasingly becoming a nation of temps.'"

The advance of the naked economy is well underway. The ability to work from anywhere at any time has led to offshoring of millions of jobs from the industrialized economy to the developing economy. That's great for elevating people out of poverty, but it's curtains for the 30-years-and-a-pension jobs that dominated western employment for the past 100 years.

What are we to do now that offshoring and automation have made many of the best-paying jobs obsolete?

"Start looking for turtles," suggest the authors, meaning cultivate a hobby you can build into a second job or a business, because your current job is going to last only 4.5 years on average and your pension?

Even if you think you have a pension, bankruptcy, deficits, crashes and confiscation could make it suddenly disappear. The authors are at their best when summarizing the often spotty data about the underlying changes in the workplace. They see the economy moving more toward solo actors: "specialists" who cultivate arcane areas of expertise and "generalists" who are good at assembling specialists into teams that last as long as the task at hand.

"The means of productions in a knowledge-based economy are now inexpensive enough to be within the reach of the individual. All you need to work these days is a decent laptop, a fast-ish Internet connection, and some inexpensive (and increasingly free) software. No big factories, no huge capital outlays, no armies of workers."

With a third of America's workforce already freelancers—and two-thirds who say they want to be self-employed—it won't be long until the average American worker gets up whenever he or she chooses; works from home, a coffee shop, an office, and a car—all four most days; does some work at nights and on weekends; takes time off whenever there's a lull.

If you accept that's what's happening—and the authors make a pretty good case for it—some issues immediately arise. Most pressing is how to provide medical insurance for a majority naked workforce. The authors try to stay out of the debate over the Affordable Care Act, but they go far enough to say that the idea of coupling health insurance with employment is "utterly asinine."

The list of potential drawbacks is long: "Online contracting circumvents a range of labor laws and practices, found in most developed countries, that govern worker protections, minimum wage, health and retirement benefits, child labor, and so forth," says Harvard's Jonathan Zittrain.

The authors have come up with some clever solutions to these problems, not the least of which is their own company, NextSpace. If no one is going to the office any more, what happens to all the office buildings and office parks in America? Already, at any given moment, two-thirds of that office space is unused.

One solution is to create Airbnb for office space, allowing firms to rent unused space in increments as small as 15 minutes. NextSpace is part of what the authors call "Portfolio 2.0" and "Workspace-as-a-Service," where entrepreneurs pay only for the office facilities they require—paying hourly or daily for such things as workspace, furnishings, and connectivity—rather than purchasing or long-term leasing.

Working naked is a lot riskier than traditional employment; these microbusinesses have a high bankruptcy rate and even when successful, are often nerve rattling to run. It's a jumpy group fueled by coffee, a beverage the authors pay homage to in nearly every chapter.

Whether you are suited to working naked or not, it is coming to your city—in fact, it's already here. Take the advice of these two smart civic leaders and their brilliant buddies at the Harvard Business Review (the dominant source of research in this book) and make a plan for a future where your life and work happen together, in realtime, wherever you choose to be.