The Rise and Fall of the Bible: The Unexpected History of an Accidental Book 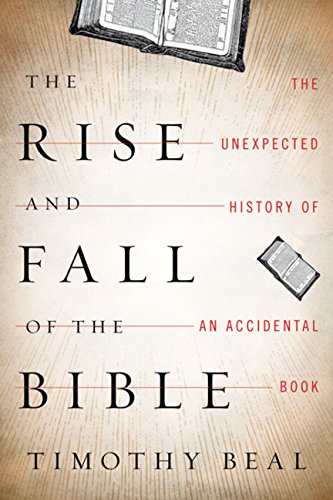 If the title does not get you, the content will. This is not Timothy Beal’s first time at the pulpit and his knowledge of the Christian Bible, or bibles, cannot be questioned. This is a unique study of a very unique text. One that is seen as infallible and without error as evolving with changes of knowledge, technology, and need.

“Bible debunkers and Bible defenders of kindred spirits,” Mr. Beal tells us. “They agree that the Bible is on trial. They agree with the terms of the debate and what is at stake, namely its credibility as God’s infallible book.”

The battle is, therefore, between those who believe that the Word is error-free against those who recognize the multitude of translations, supplemental information, and formats this Book of books has been offered to the people.

Mr. Beal’s academic and practical knowledge and research is excellent and in a format that those on the entire continuum of belief can read, understand and relate. Once the reader understands that the format is not chronological but topical in its delivery, the rest falls into place as a series of discussions rather than lectures.

The premise of the text is simple: We have moved away from the complexity and beauty of the biblical writing, away from struggling with language, personal meaning, and the sanctity. We have replaced the hard work with “enlightened” meanings and evaluations of the text by others. That these annotated versions remove the beauty and maturity of the Word as inspired by God. This is the true essence of this title, a wanting the reader to pick up The Book and read it for his or her self.

There are many statements that will turn heads of the orthodox and practical believers alike. From Mr. Beal’s opening salvo that homosexuality is not condoned in biblical verse to his running thesis that “functionally-equivalent translations . . . take far more creative and interpretive license than . . .” those who provide the translated text alone, allowing the reader to create a personal interpretation. It is the language, Mr. Beal suggests, that brings the Bible to life for the reader, not others’ interpretations.

For the author, maintaining the hundreds of versions of The Book, from waterproof versions to take into battle to E-zines and graphic novel Bibles, are created to do two things; to bring the Word to the people and to make a profit. Bible publishing is a big business and Beal spends a chapter book examining this fact without condoning it. Publishing is a business of marketing and profit. He does show disappointment in the, for the lack of a better word, laziness of the public to read the text without a preconceived direction.

The reader is told of many discrepancies, from the multiple creation stories to the use of biblical verse to justify and to denounce slavery. Mr. Beal does not tread lightly concerning confusion this holy book creates for the reader, the various translations and what would happen if a translator used an alternative definition. The “who is translating,” “which language was it translated from,” and “why is it being translated this way” are questions Mr. Beal attempts to answer, providing solid proofs and sound reasoning.

“The history of the Bible is one of perpetual revolution,” he tells the reader. “In light of its history, the Bible looks less like a rock than a river, continually flowing and changing, widening and narrowing, as it moves downstream.”

What seems to be missing, at least from this reviewer’s position, are two elements. The first is a lack of discussion of Thomas Jefferson’s Life and Morals of Jesus: A Compilation of the Teachings of Jesus Extracted Textually from the Gospels. This singular work is an example of interpretation that falls outside of the mainline functional-equivalent texts and its examination would have shown a deist vision of the Gospels.

The second is the lack of a definitive discussion on how the canons in most modern bibles were chosen? There is no mention of the Councils of Carthage or the Council of Rome. It was these councils that decided which “books” were to be gathering as the Holy Scriptures. Biblical scholars will have to field their disappointment here as “intellectuals” will have to with the missing of Jefferson’s work.

Because there is no “original” text from which to start, there is nothing to which to compare each version. Mr. Beal’s purpose is not to declare a true version of the Bible, “but to reflect creatively on what each [text] might suggest about religion, and in what sense the Bible is a religious text.” He wants the reader to reflect on the “sacred capital” of the text so there becomes “a relationship that is dynamic, transient and creative.”

What the reader may find most interesting falls under the chapter “Notes.” Initially appearing as an afterthought and designed to answer critics, it provides a wonderful insight into the research and care that went into his book. Like most endnotes, it is a bibliography of sorts, but also provides the more academic view of each chapter.

This is a wonderful study for biblical scholars and laymen, for those who believe the Bible is without error and for those who see the discrepancies as the result of human interaction with the text. It is an understanding of the Bible by one man whose methodology should be the model for all.