The Right to Sex: Feminism in the Twenty-First Century 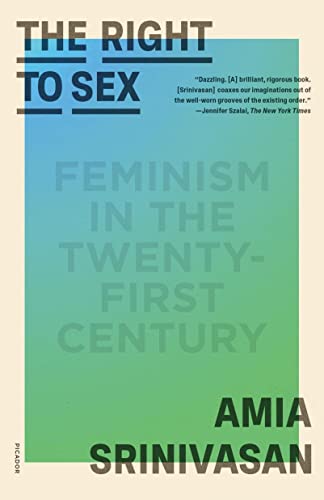 In her trenchant and brilliantly written collection of essays in The Right to Sex: Feminism in the Twenty-First Century Amia Srinivasan examines the positions taken by of different strands of feminism on sexual freedom, and the reality of sexual choice and consent. She shows how the sexual act, in principle intensely private, is in fact shaped by a multitude of public and political factors;

“Sex, which we think of as the most private of acts, is in reality a public thing. The roles we play, the emotions we feel, who gives, who takes, who demands, who serves, who wants, who is wanted, who benefits, who suffers: The rules for all this were set long before we entered the world.”

The intersection of ethnicity and sexual preference is the combined discrimination most thoroughly considered here, and while class and age, as introducing further layers of prejudice and inequality into “preference,” make some appearance, faith and religion—arguably major influencers—are almost absent from the party.

This probably relates to the fact that Srinivasan focusses on anglophone feminist thinking in the rather secular segments of the US population, with some citations from the UK, and a very few examples chosen from elsewhere, including from her own background in India. Inevitably some non-anglophone influencers, such as Simone de Beauvoir, are also referenced.

In her first essay, “The Conspiracy Against Men,” Srinivasan presents data to show how white mythology about Black hypersexuality has resulted in a disproportionate number of false rape charges against Black men in the US, and contributes to the ready dismissal of Black womens’ accusations of rape against men of any color. This and the following essay (“Talking to My Students About Porn”) also analyzes the wobbly issue of consent, in an encounter structured by patriarchal stereotypes for both parties. It also examines the role of pornography as “the lynchpin of patriarchy,” and a medium that many of her students see as establishing the performative parameters for “good” sex. The discussion of pornography and its influence on behavior concludes rather bathetically with a recommendation for better sex education, though recognizing that sex education is unlikely to neuter pornography’s power, any more than is tweaking legislation as to what can and cannot be shown.

In discussing the joys and pains of heterosexual sex, Srinivasan devotes considerable attention to the plight of Incels (Involuntary Celibates) who are primarily male, and arguably the only segment of the population who consider that they have an absolute right to sex, even if that involves raping those “wicked bitches” who are denying them. In this context, Srinivasan references the views of “utopian socialist Charles Fourier [who] proposed a guaranteed ‘sexual minimum’ akin to a guaranteed basic income,” which would eliminate sexual deprivation and ensure that romantic relationships were truly free of coercion.

Many will find her views on “fuckability” in the subsequent chapter, Politics of Desire, contentious as well as offensive, and equally certainly she will take this in her stride. In this essay and elsewhere Srinivasan discusses the “‘supreme fuckability’ of ‘hot blonde sluts’ and East Asian women, and the comparative unfuckability of Black women and Asian men.” This formulation has already got her into trouble in other publications, and no doubt will again here, though she clarifies that she is not talking about any, mythical, “pre-political, innate desirability” but about “desirability constructed by our sexual politics.” While insisting that “fuckability” and its obverse are unacceptable constructs, her detailed treatment of them almost guarantees that she will be misunderstood.

No one should be deceived into thinking that any book about sex is going to be an easy read. Srinivasan never lets us forget that she is an academic, and these essays are probably best understood as being designed for and directed at her best-read and most ambitious students. The strengths and weaknesses of the Socratic method of debate are very well demonstrated here; the strengths are shown in visiting all sides of the argument to provoke new ideas and imaginative connections; and the weaknesses in the frequent absence of closure, or some apparent U-turns.

It is to Srinivasan’s credit that she recognizes in her Preface that while she is “adamant” on some topics she remains ambivalent on other issues which are irreducibly “dense and difficult.” Consequently, some students (and any lay readers) will find the closing paragraphs of several of these essays something of a cop-out; for example, after a finely argued and extensively referenced discussion “On Not Sleeping with Your Students,” she agrees with her head of department after attending a graduate student and faculty dinner, that “When they start sitting on each other, I think it’s time to head home.”

This essay reviews this fundamentally asymmetrical relationship between professor and student, again raising the issue of the meaning of how “the relatively powerless” can be said to consent to sex with the powerful. Perhaps she underestimates here the possibility that the “powerful” professor can also be the “powerless” party?

In her final chapter she analyzes the motivations of “anti-prostitution feminists” (“symbolically invested in the punishment of sexually-entitled men”) and the consequences of criminalization of sex work for the women involved. Very few sex workers have seen the benefits of legislation that drives their activities underground, without systematic structural change. Different countries have adopted different models, but on balance decriminalization with established protections for sex workers (“the Dutch model”) “does seem to make life better for women selling sex.” And can have the same effect for anyone selling sex, not just women? (Overall Srinivasan’s analysis is quite binary, with some digressions beyond heterosexuality.) Very few people would anticipate the elimination of sex work from the world by any means, but rather its banalization and acceptability.

Unparalleled in her grasp of the nuances of the many different brands of feminism, Srinivasan is sometimes too quick to dismiss efforts that do not fall under that umbrella. The last chapter features a somewhat glib dismissal of international development efforts under microfinance and other labels, which in many well-known cases have resulted in some of the structural change she seeks.

Feminism as presented here seems to be solely the work of women and disregards the fact that very many women, convinced about women’s rights and gender equality, shudder at the label “feminist,” which indicates for them too many internal quarrels and taboos, while usually denying that there are also men on “our” side. . . .

In itself “official” feminist thinking (espoused by relatively few women or men), while an aid to critical thinking, as Srinivasan brilliantly demonstrates, is unlikely to be a major driver of change. And rather than introducing more sex education or more punitive legislation (which Srinivasan is in general opposed to) it would be better to try to inculcate more sociological and political thinking to ensure that we are all more critical consumers of the structural factors (technological change, enhanced communication and education, world wars and civil unrest, and so forth) that make for changes in sex and gender behavior in positive and negative directions.

This approach, as Srinivasan notes, was characteristic of the women’s liberation movements of the 1960s and 1970s, and perhaps it is time for revisiting and revision of these movements and de-toxification of their perceived elitism, while at the same time reminding ourselves that feminism or any other revolutionary movement can provide only a partial answer.