The Right Path: From Ike to Reagan, How Republicans Once Mastered Politics—and Can Again 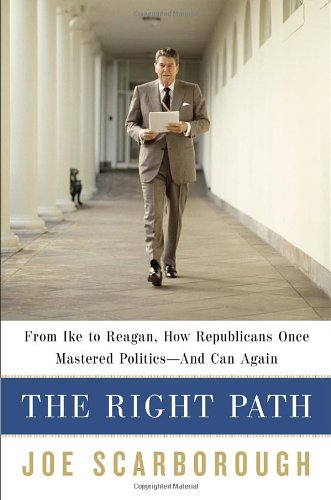 [Reviewed with Blue Collar Conservatives: Recommitting to an America That Works by Rick Santorum]

Janus is the Roman god whose two faces stare off in opposite directions. Janus was the symbol of the Duchy of Grand Fenwick, the nation novelist Leonard Wibberley invented in his classic novel, The Mouse That Roared. That tiny nation defeated the United States of America in that novel with a force consisting of one ship’s worth of men wearing medieval armor and longbows.

It’s easy to get the sense from two new books about the 2016 Presidential election, Blue Collar Conservatives by Rick Santorum and The Right Path by Joe Scarborough, that the Republicans ought to adapt Janus as their national symbol, because the party is facing in two opposite and potentially irreconcilable directions.

Joe Scarborough, creator and honest of MSNBC’s Morning Joe, has written a slender, tender history of presidential politics in the 20th century, with attention to entertaining and fascinating detail. His point: Republicans can win in 2016 only if they embrace the “big tent” philosophy of Dwight Eisenhower, Ronald Reagan, and that ultimate political pariah Richard Nixon.

Rick Santorum, facing straight in the opposite direction, has written a slender critique of the culture wars that have roiled the United States in general and the Republican Party in particular. Back in 1972, according to Scarborough, Republicans reviled liberal Democratic candidate George McGovern as the champion of “amnesty, abortion, and acid.” Santorum excoriates the liberal wing of his Republican party for essentially embracing the same ideals.

Santorum blames a cultural elite raised in sixties values for extolling a culture of free love and personal irresponsibility, but actually living mundane, relatively normal married lives safe within the confines of their gated communities. The rich, Santorum argues, have bequeathed to the working class the sort of sixties values they abandoned once they got into grad school and got jobs—sleep with whomever you want, don’t get married, and work is for suckers.

Santorum, borrowing heavily from Charles Murray’s recent and brilliant study of social and economic trends, Coming Apart, essentially believes that working people are too dumb to recognize the load of bull that the social elites have handed them. The working class is no longer working, Santorum says, because wealthy people have sent their jobs overseas and convinced them that sex, drugs, and rock ’n’ roll is a viable lifestyle.

Santorum’s solution: Banish from the Republican party anyone who does not see the culture wars through the same prism that he does.

In other words, here’s Scarborough, trying to get everybody inside the tent, and here’s Santorum, explaining firmly that admission to the tent is for ideological ticket holders only.

Which means that the Republican Party in 2016 is less likely to be The Mouse That Roared and more likely to be a rerun of the presidential candidate freak show that demeaned the airwaves in 2012 and left, as the last candidate standing, the grossly unelectable Mitt Romney.

The two books illustrate perfectly the dilemma Republicans face. There are two strains of political thinking that have animated the Republican party since the Great Depression. Here’s the problem. Scarborough’s big tent includes social liberals, people who accept gay marriage, people who support a woman’s right to choose, and other such individuals who are anathema to Santorum’s social conservatives. How do you get all these people into one big tent? I’m not even sure you can fit them all into any given state on the map.

How these two categorically opposed groups of people, clearly facing in opposite directions, can be reconciled enough to choose a presidential candidate is anybody’s guess. How they can do so without violating Reagan’s eleventh commandment—thou shalt not criticize a fellow Republican—is an even greater question. And how to select a candidate who is not left bloody and bowed by his party’s culture wars—that’s the mystery of the ages for the Republican Party in 2016.

In The Mouse That Roared, The Duchy of Grand Fenwick hits upon a brilliant idea for balancing its budget: It will declare war on the United States, lose, and then rack up vast amounts of dollars of foreign aid, because America is very charitable toward the nations it vanquishes. Thus the assault on Manhattan involving one boat and a couple of dozen men in medieval suits of armor and longbows.

Unfortunately for the Duchy of Grand Fenwick they accidentally win and have to deal with the reality of governing the United States.

As long as the two faces of the Republican Party continue to talk past each other, it would appear that the GOP in 2016 will have no such similar problem.