Riders on the Storm: A Novel (Working Lives Fiction) 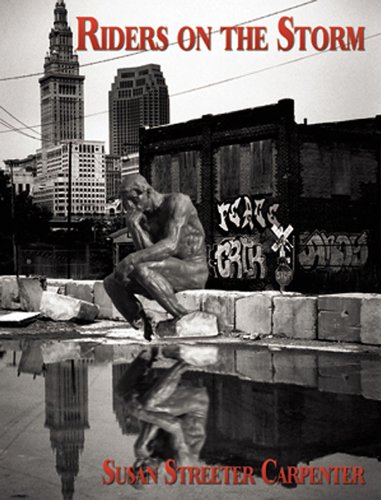 Bob Dylan’s album John Wesley Harding was released in 1967. Susan Streeter Carpenter’s debut novel, Riders on the Storm, is set in Cleveland in 1968. The title comes from the classic Dylan song from that album, “All Along the Watchtower.”

In her book, a group of college students from Case Western Reserve University join The Movement and alternately participate in indiscriminant sex, call cops pigs, and plot out acts of violence in the name of peace. Early in the book, a slide presentation showing civilian casualties in Vietnam strengthens the resolve of the revolutionaries. The reader follows the actions of the characters throughout the year 1968, including their travels to Chicago to participate in a demonstration, and the main character’s boyfriend’s attempts to circumvent the draft (Ivy and Chuck are in love throughout the book, except when they are interested in sex with other people).

Chuck, an editor for an underground newspaper, possesses a personality that is in direct contrast to Bert, who is clearly shown to be a man of action and another person of interest for Ivy. This is probably the best example of character development in the book. Otherwise, it is difficult to root for or find any redeeming qualities in the self-absorbed ensemble.

The exact purpose of the book is unclear: Is it a statement against the war? Against the government? An attempt to explain the counterculture’s beliefs and actions? The scenes and characters jump from one situation to the next without much coherence. One minute people are injured, having sex, or doing drugs; the next, a character realizes she or he must find a job or needs more space, or just plain wants to have sex again. A character’s parents are introduced or revisited on one page, and suddenly, there is a jump to some political or cultural theme on the next. The story is difficult to follow. Perhaps the problem is that there is an underlying assumption that current society is so familiar those times, that the author takes for granted that the reader just “gets” what is going on, when that is not the case.

Back to Dylan. There are some Dylan references sprinkled in throughout the story. Some do not do much to advance the story. For example, when Jane, an evolving feminist, gets her hair cut, it is said to look like Dylan’s. So? It’s hard to tell what this has to do with anything. However, the title works.

In Chapter 21, Tessa, technically Bert’s girlfriend and a member of the resistance, plays the song over and over again for three straight days, equating it to her concept of the revolution. The song is said to be based on Isaiah 21:5–9, so the chapter in which this scene takes place is likely no coincidence. Some of the lyrics that are playing in the background are repeated to the reader for effect (“There’s too much confusion, I can’t get no relief”) as Tessa shares her take on the song. She refers to it as “stone revolution,” stating that “she needs that song.” She refers to the verse, “Businessmen, they drink my wine, plowmen dig my earth/None of them along the line know what any of it is worth,” and indicates how the princes in the tower are oblivious to the wildcat’s howl and the approaching riders (the final verse of the song is, “Two riders were approaching, the wind began to howl”). This scene foreshadows upcoming acts of terrorism that bring the story to a close. It works particularly well bringing together the themes and characters of the book. It is unfortunate that there aren’t more of these moments.